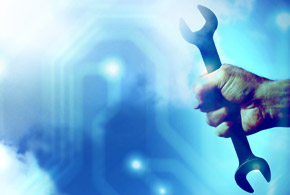 When most folks in the channel think about distribution, their thoughts naturally turn toward familiar names such as Ingram Micro and Tech Data. But in the age of the cloud, it turns out that cloud service providers (CSPs) such as Amazon Web Services (AWS) and Microsoft are rapidly emerging as the new kings of software distribution.

At its Worldwide Partner Conference (WPC) earlier this month, Microsoft drove the point home in the form of a new partnerships with GE and AT&T covering a big data analytics platform and a toolkit for building Internet of things (IoT) applications on Azure.

“We want to make it easier for developers to discover Azure components,” said Mobeen Khan, assistant vice president for industrial IoT solutions at AT&T. “Building an IoT application is not as simple as a mobile app.”

In fact, Microsoft revealed that when it opened an app store on Microsoft Azure earlier this month, there were already 200 applications available to be deployed on Azure. The challenge Microsoft faces is that many of these third-party cloud applications and tools, including those from GE and AT&T, are also already available on AWS.

The good news for Microsoft is that as the critical mass of applications on Azure continues to build, momentum naturally increases. Datadog this week, for example, announced that it is now making it possible to use its monitoring tools delivered as a service to track events on the Azure platform because there is increased demand.

“We’re seeing a lot more demand for Azure from our enterprise customers,” said Daniel Langer, a product manager for Datadog.

Locked in a battle to catch up with AWS, Microsoft is counting on independent software vendors (ISV) to drive up consumption of Microsoft Azure. Microsoft claims that the growth rate for consumption of those Azure services was in the triple-digit range last year. But the gap between AWS and Microsoft Azure is still fairly wide in terms of overall usage. Overall, Microsoft also claims that Azure partners are seeing 65 percent gross margins on a service that now has more zones and regions than both AWS and Google combined.

Microsoft and AWS are not the only game in town. Rackspace just launched a program under which its partners can be rewarded for selling referrals to both Azure and Microsoft Office 365 that comes bundled with support provided by Rackspace.

Blake Wetzel, vice president of channel sales for Rackspace, said the goal is to see how many potential partners there are that would prefer to outsource the management of having to deal with both Microsoft and the support their cloud customers might need.

“We’re testing the waters with this program,” said Wetzel. “We think our fanatical support will prove to be a differentiator.”

Whatever approach Microsoft partners take in the cloud, some form of cloud computing will be a much larger part of their portfolio in the years ahead. The challenge now is figuring out how best to balance that portfolio in a way that generates enough profit for the partner to make that effort worthwhile in the first place.

Michael Vizard
Michael Vizard is a seasoned IT journalist, with nearly 30 years of experience writing and editing about enterprise IT issues. He is a contributor to publications including Programmableweb, IT Business Edge, CIOinsight, Channel Insider and UBM Tech. He formerly was editorial director for Ziff-Davis Enterprise, where he launched the company’s custom content division, and has also served as editor in chief for CRN and InfoWorld. He also has held editorial positions at PC Week, Computerworld and Digital Review.
Previous article
How Microsoft Sees Partners’ Roles in the Cloud
Next article
10 Reasons to Update Legacy Monitoring Tools