Mobile Malware Infections on the Rise

Android OS takes the top spot as the most targeted mobile platform, as malware infections hit an all-time high, a new report from Nokia shows. Smartphone infections accounted for 78% of the infections detected in the mobile network. The remaining 22% are related to Windows/PC systems connected using dongles or tethered through phones. Android smartphones accounted for 74% of all malware infections compared to Window/PC systems (22%) and other platforms, including iOS devices (4%). The average monthly infection rate for all mobile devices increased to 0.66%. Mobile infections peaked at 1.06% of devices tracked in April. This translates into 1 out of every 120 smartphones with some type of malware infection. Malware infections included ransomware, spyphone applications, SMS Trojans, personal information theft and adware. 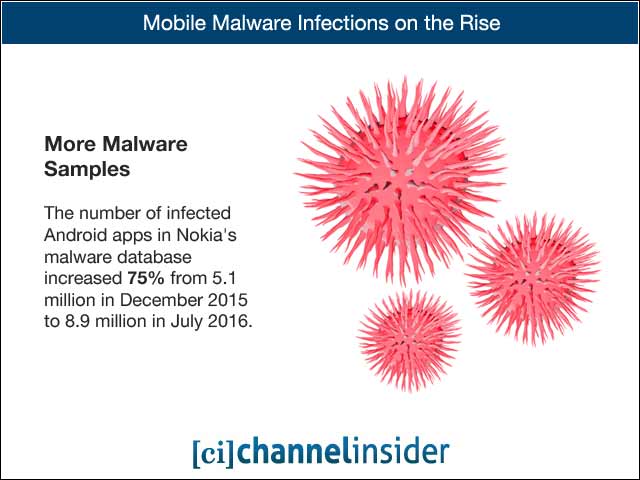 The number of infected Android apps in Nokia’s malware database increased 75% from 5.1 million in December 2015 to 8.9 million in July 2016. The monthly infection rate in residential fixed broadband networks averaged 12% in the first half of 2016, up from 11% in late 2015, primarily due to malware on Windows PCs and laptops in the home, but including infections on smartphones using home WiFi.