12 Reasons IT Infrastructure Still Matters in the Cloud Age IT Infrastructure Investments Over Next 12 Months Top Technology Drivers of IT Investments

Many organizations now have a better handle on the true cost of enterprise computing: 33% want to reduce operational costs while 29% cited faster application development. IT infrastructure investments clearly go beyond being just another commodity. While 41% cited the ability to optimize profit and revenue, 30% said infrastructure was a key business strategy enabler. 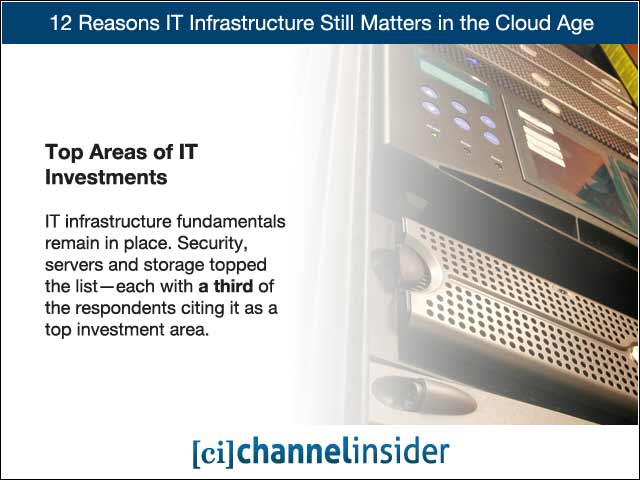 Top Areas of IT Investments

IT infrastructure fundamentals remain in place. Security, servers and storage topped the list—each with a third of the respondents citing it as a top investment area. More than half don’t know where those workloads will run in three to five years. Roughly 80% of all workloads still run on-premise versus 20% in the cloud. IT organizations are only slightly more prepared for mobile than cloud computing. Almost 40% said they are either prepared or fully prepared. Big data requires major investments in IT infrastructure. Only 38% reported that they are prepared. Social media drives a need for IT infrastructure that can dynamically scale. Only 38% say they are prepared or fully prepared. Of the 43% who cited security as a major concern, insider threats are the most lethal. Being compromised by a rogue administrator or privileged insider (48%) is the top concern, followed by social media, at 41%. Data management on a global scale has become a major problem. Nearly half (46%) consider the ability to efficiently and securely move data from one region to another a major impediment. Effectiveness of Collaborating With the Business

Only 30% said they are collaborating effectively with the business. That would suggest another 70% see room for improvement.

Michael Vizard
Michael Vizard is a seasoned IT journalist, with nearly 30 years of experience writing and editing about enterprise IT issues. He is a contributor to publications including Programmableweb, IT Business Edge, CIOinsight, Channel Insider and UBM Tech. He formerly was editorial director for Ziff-Davis Enterprise, where he launched the company’s custom content division, and has also served as editor in chief for CRN and InfoWorld. He also has held editorial positions at PC Week, Computerworld and Digital Review.
Previous article
Channel News Briefs: Week of Aug. 3
Next article
IoT Brings Channel New World of Opportunity, Challenges