Channel Execs On The Move 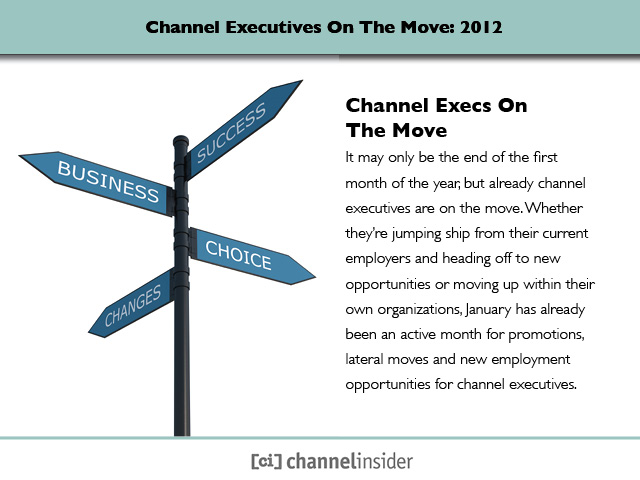 Channel Execs On The Move

It may only be the end of the first month of the year, but already channel executives are on the move. Whether they’re jumping ship from their current employers and heading off to new opportunities or moving up within their own organizations, January has already been an active month for promotions, lateral moves and new employment opportunities for channel executives. Tom LaRocca, who spent 12 years with HP and was one of the key people behind the formation of the PartnerONE program as vice president of marketing and strategy for HP’s Solution Partners Organization, celebrated the New Year by joining Oracle as the vice president of worldwide product strategy and alliances. Oracle has taken aim at recruiting not only HP partners, but also HP executives, over the last couple of years. With a new CEO taking the reins of Big Blue, there are additional changes being made in the management team. Mark Hennessy, who has been with IBM for 30 years in various marketing, management and sales roles, stepped into the role as Rich Hume shifted into a role managing IBM’s European operations in Madrid. After more than two years serving as McAfee’s senior vice president of worldwide channels for commercial and SMB sales, where he drove major changes in the security vendor’s channel programs, Alex Thurber began the year by moving on to assume the role of vice president of sales at Tripwire. Prior to joining McAfee is August 2009, Thurber had spent 10 years of his career in Cisco Systems’ worldwide channels organization. McAfee quickly filled the hole left by Alex Thurber’s departure by shifting its vice president of channels, alliances and specialist sales into the role of channel chief. Gavin Struthers, who assumed the role of senior vice president of worldwide channel operations at the beginning of January, was formerly McAfee Asia-Pacific channel chief. Prior to that, he held senior roles in Australia and New Zealand. Christopher Rajiah is stepping into the Rackspace channel chief shoes previously worn by Robert Fuller, who is now the vendor’s vice president of global enterprise solutions. Previously the director of North American channels at Extreme Networks before joining Rackspace in 2010, Rajiah is considered a channel relations expert. Kevin Gilroy, who joined SAP in January 2010 to lead the channel organization for SMB organizations in North America, has been appointed the new head of global indirect channels. Gilroy will be responsible for growing global indirect revenue through SAP partners and developing new channel business.