Windows 10 Headwinds to Get Stronger 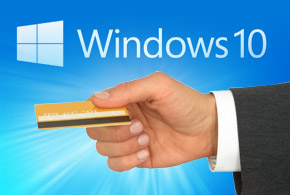 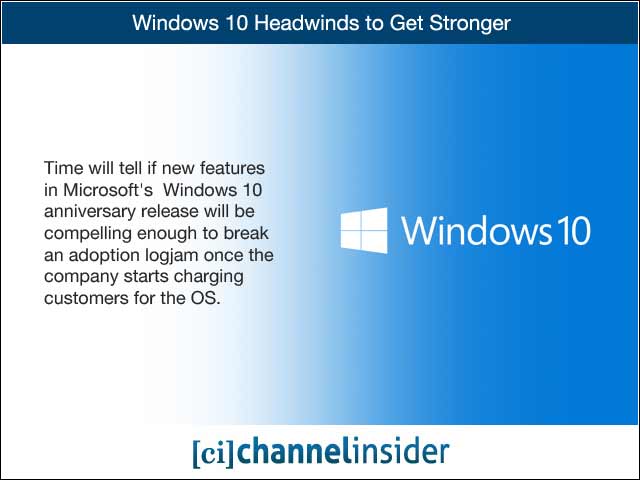 Windows 10 Headwinds to Get Stronger

Time will tell if new features in Microsoft’s Windows 10 anniversary release will be compelling enough to break an adoption logjam once the company starts charging customers for the OS. 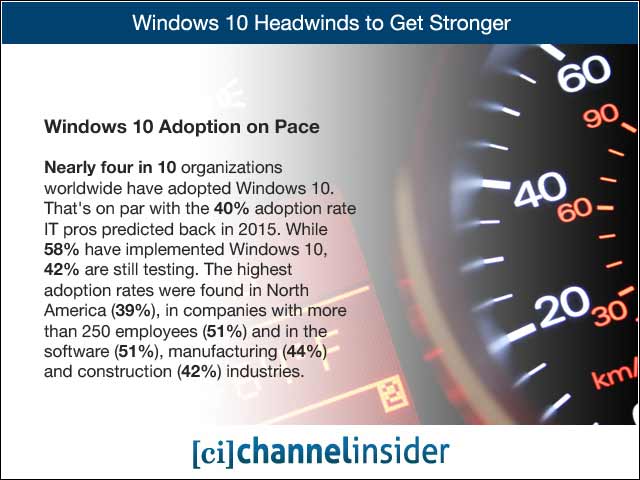 Nearly four in 10 organizations worldwide have adopted Windows 10. That’s on par with the 40% adoption rate IT pros predicted back in 2015. While 58% have implemented Windows 10, 42% are still testing. The highest adoption rates were found in North America (39%), in companies with more than 250 employees (51%) and in the software (51%), manufacturing (44%) and construction (42%) industries. 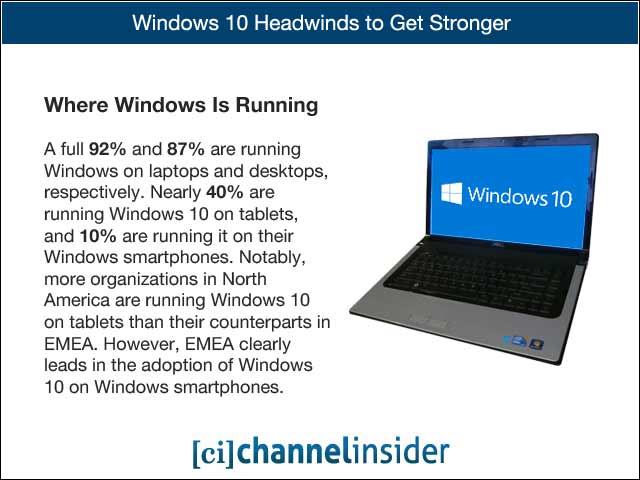 Where Windows Is Running 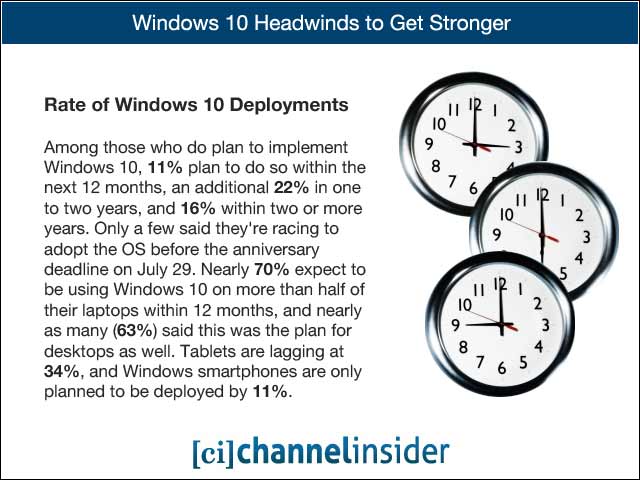 Among those who do plan to implement Windows 10, 11% plan to do so within the next 12 months, an additional 22% in one to two years, and 16% within two or more years. Only a few said they’re racing to adopt the OS before the anniversary deadline on July 29. Nearly 70% expect to be using Windows 10 on more than half of their laptops within 12 months, and nearly as many (63%) said this was the plan for desktops as well. Tablets are lagging at 34%, and Windows smartphones are only planned to be deployed by 11%. 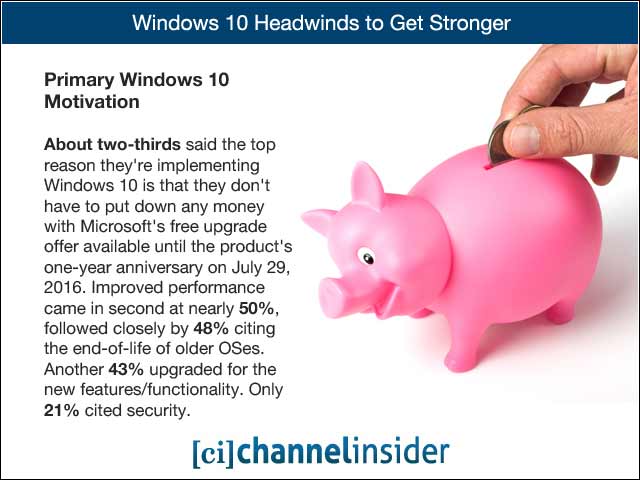 About two-thirds said the top reason they’re implementing Windows 10 is that they don’t have to put down any money with Microsoft’s free upgrade offer available until the product’s one-year anniversary on July 29, 2016. Improved performance came in second at nearly 50%, followed closely by 48% citing the end-of-life of older OSes. 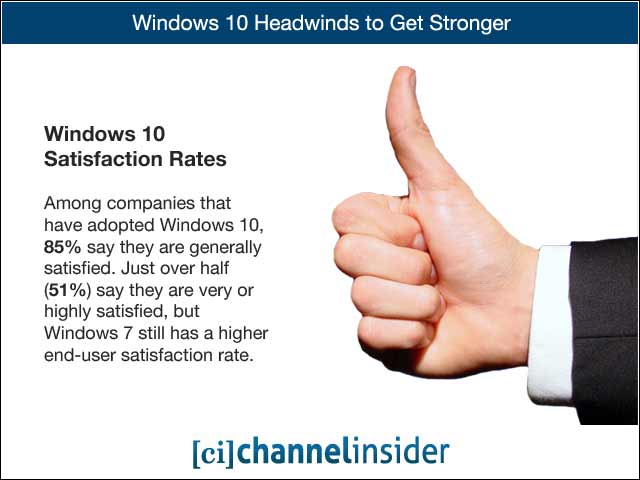 Among companies that have adopted Windows 10, 85% say they are generally satisfied. Just over half (51%) say they are very or highly satisfied, but Windows 7 still has a higher end-user satisfaction rate. 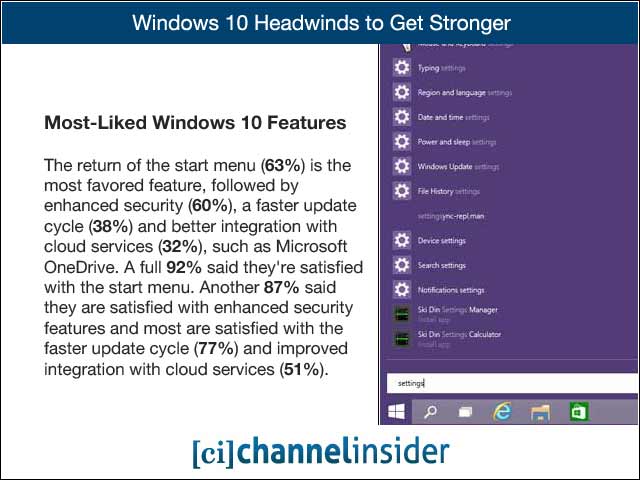 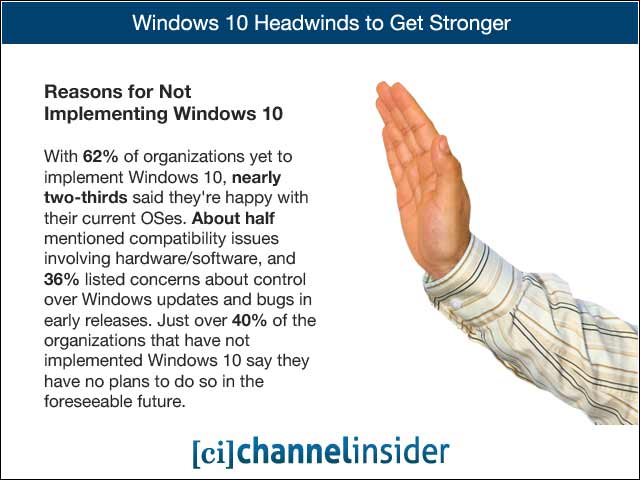 Reasons for Not Implementing Windows 10

With 62% of organizations yet to implement Windows 10, nearly two-thirds said they’re happy with their current OSes. About half mentioned compatibility issues involving hardware/software, and 36% listed concerns about control over Windows updates and bugs in early releases. Just over 40% of the organizations that have not implemented Windows 10 say they have no plans to do so in the foreseeable future. 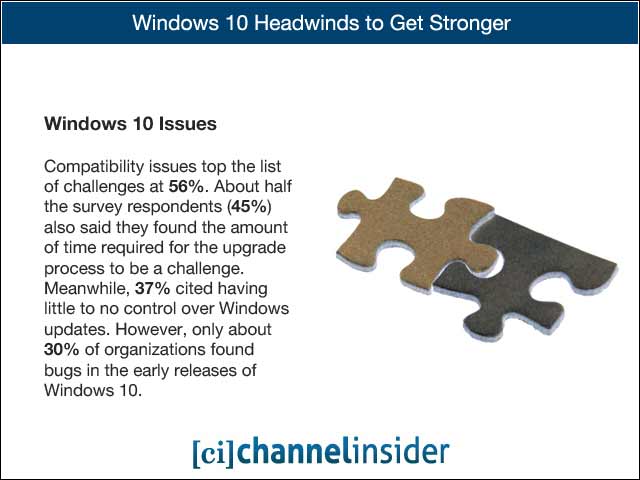 Compatibility issues top the list of challenges at 56%. About half the survey respondents (45%) also said they found the amount of time required for the upgrade process to be a challenge. Meanwhile, 37% cited having little to no control over Windows updates. However, only about 30% of organizations found bugs in the early releases of Windows 10. 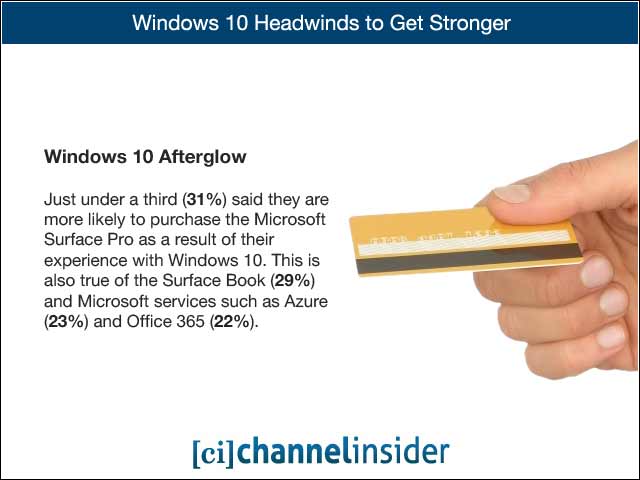 Just under a third (31%) said they are more likely to purchase the Microsoft Surface Pro as a result of their experience with Windows 10. This is also true of the Surface Book (29%) and Microsoft services such as Azure (23%) and Office 365 (22%).

Michael Vizard
Michael Vizard is a seasoned IT journalist, with nearly 30 years of experience writing and editing about enterprise IT issues. He is a contributor to publications including Programmableweb, IT Business Edge, CIOinsight, Channel Insider and UBM Tech. He formerly was editorial director for Ziff-Davis Enterprise, where he launched the company’s custom content division, and has also served as editor in chief for CRN and InfoWorld. He also has held editorial positions at PC Week, Computerworld and Digital Review.
Previous articleBy the Numbers: ChannelCon 2016 Explores Key Trends
Next articleAPI Provider Plight: Pitfalls Despite Potential