More IT service providers are relying on IT automation to compete effectively, a new study finds. The stakes will only get higher with time. Number of IT Environments Managed 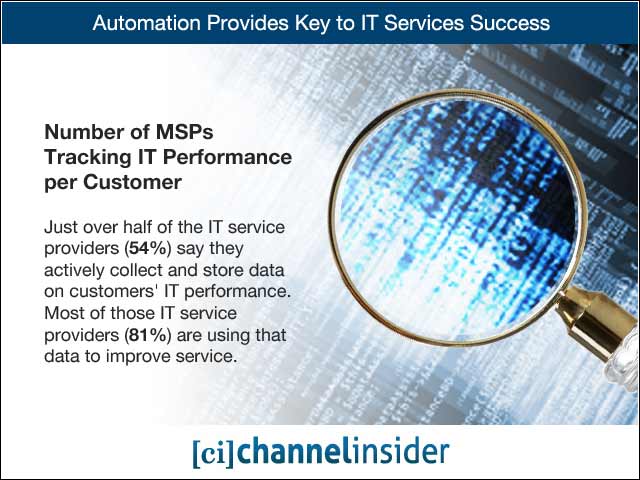 Number of MSPs Tracking IT Performance per Customer Just under a third (30%) said it was too complicated, while 23% said they lack the tools needed to make sense of it. Only a minority of IT service providers (8%) have put in place automated processes for transforming data into actionable recommendations. For those that have, data automation has directly led to more than a third doubling their client servicing capacity. Almost three-quarters can now service customers with more complex IT environments and more than one-quarter of respondents have even entirely automated their managed security services. ROI on IT Automation

One-fifth (20%) say they have already enjoyed at least a 100% return in their automation investments. The proportion experiencing 100% or more ROI in the next two years is expected to rise from 20% today to 47%. IT Automation as Key to Business Expansion

Nearly 75% of those who have not yet deployed data-driven automation strategies believe that doing so would enable them to deliver a range of new services. More than one=third believe it would give them a competitive advantage. A further 49% see it as the route to offering more sophisticated services and winning more business as a result. Another 38% say they can support more complex IT environments. 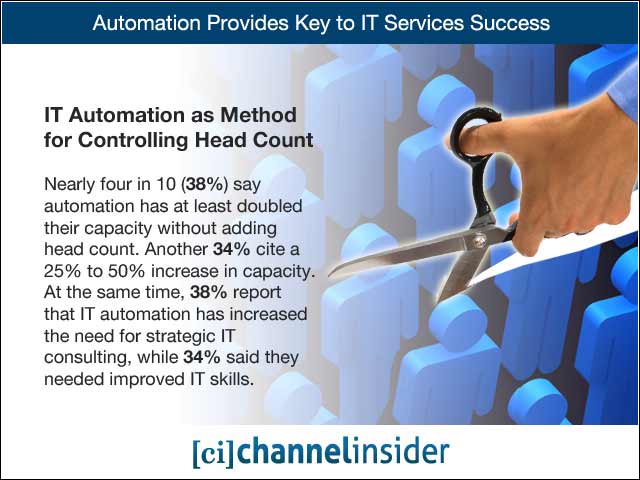 IT Automation as Method for Controlling Head Count

Nearly four in 10 (38%) say automation has at least doubled their capacity without adding head count. Another 34% cite a 25% to 50% increase in capacity. At the same time, 38% report that IT automation has increased the need for strategic IT consulting, while 34% said they needed improved IT skills. IT Automation as a Matter of Survival

Just over half (52%) actively fear that service providers that do not adopt automation will likely lose out to their more advanced competition; 6% even think that failure to adapt will lead to going out of business.

Michael Vizard
Michael Vizard is a seasoned IT journalist, with nearly 30 years of experience writing and editing about enterprise IT issues. He is a contributor to publications including Programmableweb, IT Business Edge, CIOinsight, Channel Insider and UBM Tech. He formerly was editorial director for Ziff-Davis Enterprise, where he launched the company’s custom content division, and has also served as editor in chief for CRN and InfoWorld. He also has held editorial positions at PC Week, Computerworld and Digital Review.
Previous articleTech Data Launches IoT Business Practice
Next articleMicrosoft Maps Out Its Partner Priorities