Channel Needs to Navigate the AWS Cloud With Care Channel Needs to Navigate the AWS Cloud With Care

As the size and scope of Amazon Web Services (AWS) increases, solution providers across the channel will need to carefully navigate threats and opportunities. AWS generates $13 billion in annual revenue with a growth rate of 55%. The AWS global infrastructure is comprised of 42 Availability Zones across 16 geographic regions worldwide, with another 2 AWS regions (and 5 Availability Zones) in France and China expected to come online in the coming months. In 2017, AWS will add four more availability zones to create a total of 18 around the world. Each zone consists of multiple distributed data centers. Size of the Marketplace AWS aims to promote APN Consulting and Technology Partners, now that both have passed technical reviews and have a validated track record of customer success with specific AWS services. The AWS Services Delivery Program has more than 150 APN partner solutions and practices validated across 15 categories. In 2017, AWS is committing to launching a VMware Cloud on an AWS Partner Program that will reward partners for deploying and operating the VMware Cloud on AWS. VMware, of course, has its own channel program. 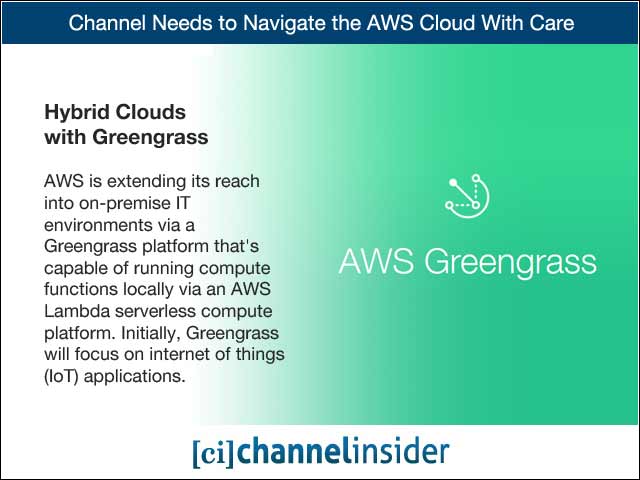 AWS is extending its reach into on-premise IT environments via a Greengrass platform that’s capable of running compute functions locally via an AWS Lambda serverless compute platform. Initially, Greengrass will focus on internet of things (IoT) applications. AWS has created the Public Sector Partner Program to address the government market. At launch, there were 350 partners in the program. More than 10,000 new partners have joined the APN in the past 12 months, with 60% of APN partners headquartered outside the U.S. AWS has also launched an AWS Partner Solutions Finder to help partners market their services more successfully. AWS has launched a Postgres database service capable of running applications designed to run on Oracle’s database. It also provides an Oracle database service. But it’s clear AWS wants to move workloads away from Oracle databases that are significantly more expensive to deploy than open-source database platforms. AWS is also making it possible to launch SQL queries directly against data stored in its S3 cloud storage service. AWS is extending the number of managed services it offers around IT operations. The latest offering includes an implementation of the open-source Chef IT automation engine; AWS Batch, a managed batch processing service; AWS X-Ray, an application visualization service; and AWS Code Build, an application testing service. Most of the machine learning algorithms are also exposed as a managed service delivered by AWS.

Michael Vizard
Michael Vizard is a seasoned IT journalist, with nearly 30 years of experience writing and editing about enterprise IT issues. He is a contributor to publications including Programmableweb, IT Business Edge, CIOinsight, Channel Insider and UBM Tech. He formerly was editorial director for Ziff-Davis Enterprise, where he launched the company’s custom content division, and has also served as editor in chief for CRN and InfoWorld. He also has held editorial positions at PC Week, Computerworld and Digital Review.
Previous articleQuest Looks to Tech Data to Ease Channel Transition
Next articleDell EMC to Review Channel Partners Biannually