What Partners Should Know About the Dell-EMC Deal What Partners Should Know About the Dell-EMC Deal

The Dell-EMC merger has major implications for partners that work with or compete against both companies. Here’s what the channel should know about the deal. Dell is taking on some additional $40 billion in financing to help fund the acquisition of EMC. Part of the deal involves issuing a tracking stock for VMware to remain a publicly held company. Less clear is how much cash Dell will have available going forward to fund operations versus service debt. Paying for the Deal

One major reason Dell is in a position to acquire EMC is that it added 2,000 salespeople since going private to increase cash flow. Now that it plans to merge with EMC, the channel should expect Dell to make even larger investments in sales both inside and outside the channel. The portions of Dell that focus on enterprise systems will be moving from Round Rock, Texas, to the current headquarters of EMC in Hopkinton, Mass., which will become the new locus of control for Dell’s efforts to dominate the data center. Besides overlapping server and storage product portfolios, EMC has partnerships with everyone from Cisco to Lenovo that are likely to be sources of conflict for Dell and EMC partners going forward. Both companies also have competing investments in IT management software in the form of VMware and technologies Dell gained by acquiring Quest Software. 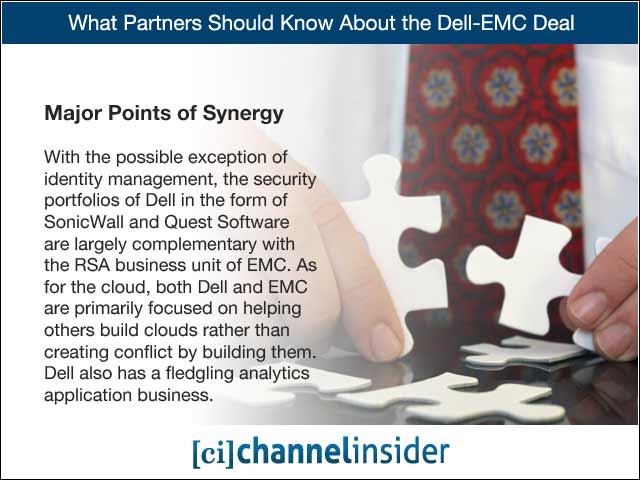 With the possible exception of identity management, the security portfolios of Dell in the form of SonicWall and Quest Software are largely complementary with the RSA business unit of EMC. As for the cloud, both Dell and EMC are primarily focused on helping others build clouds rather than creating conflict by building them. Dell also has a fledgling analytics application business. The two biggest issues facing Dell would be any potential rise in interest rates, and how much IT infrastructure will be replaced on-premise by services running in the cloud using commodity platforms that cloud service providers built themselves. Back Story Behind the Deal

Negotiated over a year, talks about merging the two companies became serious last fall—about the same time activist investors began pressing EMC about the federation approach it set up to manage EMC, VMware and Pivotal. Biggest Beneficiaries of the Deal

Partners of Hewlett-Packard, Lenovo, Cisco and IBM are sure to target EMC and Dell customers that at this point are unsure what products the combined new entity will continue to research and develop beyond 2016. Investments in OpenStack as a hedge against VMware uncertainty is also likely to increase. Most to Lose From the Deal

Dell and EMC have reassured their partners of the importance of their relationships. However, Cisco and Nutanix are likely going to have to find other channels than Dell and EMC to bring their products to market. (Nutanix, which has been a Dell partner, has been selling converged infrastructure that competes with appliances configured with software from VMware. While Cisco has been selling servers and networking gear through EMC, Dell has been developing its own line of network switches. ) With Cisco under new leadership and HP breaking up into two companies, more major market changes are likely in the offing. Among the vendors likely to be the most aggressive are Lenovo, which is trying to move upstream into the data center following its acquisition of IBM’s x86 server business.

Michael Vizard
Michael Vizard is a seasoned IT journalist, with nearly 30 years of experience writing and editing about enterprise IT issues. He is a contributor to publications including Programmableweb, IT Business Edge, CIOinsight, Channel Insider and UBM Tech. He formerly was editorial director for Ziff-Davis Enterprise, where he launched the company’s custom content division, and has also served as editor in chief for CRN and InfoWorld. He also has held editorial positions at PC Week, Computerworld and Digital Review.
Previous articleArbor Enlists Partners to Help Fight DDoS Attacks
Next articleApache Spark Adoption Fuels Big Data Analytics Growth