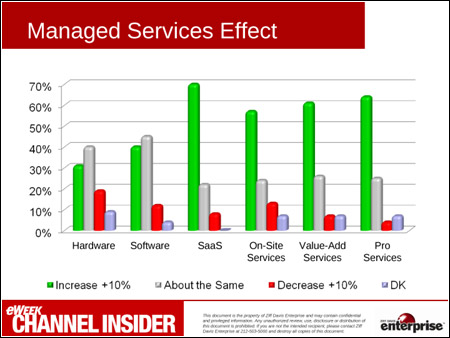 Microsoft dove deeper into the software-as-a-service market today with the general release of Exchange Online and Office SharePoint Online, offering the hosted applications both directly and through solution providers.

The general availability of hosted Exchange e-mail and SharePoint collaboration server come as no surprise; Microsoft has carried beta versions of the two services for months on its Microsoft Online Services portal and each application has been in a massive channel beta program.

While Microsoft will sell the SAAS applications to businesses of all sizes directly, it’s counting on solution providers to deliver value-add migration and enhancement services that improve upon end users’ experience, says Robert Deshaies, vice president of Microsoft’s U.S. Partner Group. “It’s the same code base as the applications, but slightly reduced code set from the fully on-premise offering,” Deshaies said. “Our partners can build services around it. Most of our partners and integrators don’t see this as a big profit opportunity, but it does provide an opportunity for more services.”

Microsoft has been steadily building its “software+services” strategy, looking to compete against upstarts such as Google and ZoHo, which have garnered much momentum in the business productivity space with their online, low-cost applications.

Traditionally a channel-centric vendor, Microsoft raised concerns about its SAAS strategy when it announced last summer at its Worldwide Partner Conference a discounting structure for its services that many solution providers called inadequate. Services discounting gives solution providers 12 percent of the first year sale, plus a 6 percent commission and then a 6 percent annuity for each year of the engagement.

The low discounting structure plus Microsoft’s announced intentions of selling services direct made many solution providers fearful that the vendor would try to squeeze them out of the SAAS market. In the Channel Insider 2008 Managed Services Survey, Microsoft was overwhelming rated as the top threat to solution provides’ managed services business over the next two year.

Deshaies understands the concerns solution providers may have about Microsoft’s ultimate intentions, which is partly why the vendor undertook such an extensive beta program for the Exchange and SharePoint services. More than 1,500 solution providers and 18,000 customers participated by testing the applications, learning capabilities and customization options and working with end users on implementations.

“Every month we’re getting more and more aligned,” Deshaies said. “Our partners are getting the first-hand experience and knowledge.”

Microsoft believes that once a solution provider lands an account with software or a service, it will be able to convert more professional services and product sales with that same customer. The Channel Insider Managed Services Survey found end users will buy more software, infrastructure management and professional services after they’ve experienced an initial managed services offering (see graphic, below).

As part of the SharePoint beta program, Evolve Partners worked with implementing the services offering with two customers—one that was already using an on-premise offering and a virgin account. Based on that experience, Evolve—a solution and managed services provider in Anaheim, Calif.—discovered it could sell high-value, high-margin professional migration, customization and training services to its customers.

“In a one-time migration from Exchange 2003 to 2007 it is no different than if you’re doing it in the cloud. But once it’s done on-premise, you go away. With a service, you can then step back and ask how else you can help them,” says Tim Acker, Evolve’s chief operating officer.
“So many small and medium businesses get through the migration, but they don’t use the application. [Services] frees up the dollars to help them improve utilization. That’s especially good with SharePoint so we can help them with document retention and collaboration, instead of having them worry what version they’re on,” Acker adds. “That’s a huge value to the customer.”

Solution providers aren’t as concerned about Microsoft or other hosted services taking business away from their traditional product sales. The slowing economy is forcing many businesses—particularly small and midsized organizations—to tighten their fiscal belts. Moving the IT solution equation from a capital expense of a product sale, in which they pay out a large sum up front, to an operational expense, where they pay a monthly subscription fee, makes IT purchasing easier to handle, Acker says.

SharePoint and Exchange are two of Microsoft’s best-selling applications. While some users may shift from on-premise to host service versions of the applications, Deshaies predicts that Microsoft and its partners will capture more net-new business from rivals, such as Google.

“We are not seeing cannibalization or share shift. We’re seeing a greater adoption by more types of customers,” Deshaies says. “We’re actually taking competitive share away from some of those online offerings. We’re recapturing mindshare from those types of scenarios where some customers didn’t think of us because of the lack of offerings.”

Microsoft’s expansion into the online services market is perceivably a threat, but these hosted service providers and Microsoft concur that the Exchange and SharePoint Online offerings are basic compared to the enhanced services offered by other partners.

Where Microsoft’s expansion may benefit solution providers and hosted-services companies is raising the level of awareness and demand among end users through its marketing muscle.

“Microsoft is putting its marketing behind services and that’s going to benefit all their partners,” says Lisa Coleman, director of marketing at Intermedia.