Windows XP is an enterprise favorite that has been able to weather an entirely new operating system from Microsoft. But Windows 7 is a different force altogether. And although some companies have been loath to switch to the new platform, 2011 could be a banner year for Windows 7. The RIM PlayBook is designed with companies in mind. However, the device will initially ship without 3G connectivity, making it potentially undesirable to the average company. There is still time for RIM to address that problem, but if it doesn’t, the PlayBook could have some trouble competing in the enterprise next year. Android is a fine platform for consumers. And that’s precisely why it has performed so well in the mobile market. But in the enterprise, it leaves much to be desired. And it’s facing far too many platforms are more appealing to companies. Realizing that, 2011 could be a difficult year for Android vendors that are trying to get their smartphones into the hands of the enterprise. Apple’s iPhone is one of the most coveted consumer-focused devices on the market. But that doesn’t mean that it will start appealing more to companies in 2011. It still lacks two key features that the enterprise wants — a physical keyboard and a removable battery. And there is concern that it might cut into productivity, rather than help it. Those are two major issues that Apple must overcome if it wants its smartphone to appeal to the enterprise. Google keeps trying to bring its Web-based productivity suite to the enterprise. But in each and every case, it falls short. The reason why is simple: Google Docs simply doesn’t work as well as the enterprise wants. And they still require the functionality Microsoft offers in the desktop-based Office suite. Until Google can change that, Docs will fall short in the enterprise. If Google Docs is having trouble competing in the enterprise, it’s quite clear that Office Web Apps will also struggle. The platform might have the right apps, but it lacks the complexity and overall quality that the enterprise finds in desktop-based versions. Even though Microsoft is behind it, Office Web Apps simply doesn’t offer the functionality that it should. Speculation abounds over when Google will finally release its Chrome OS, cloud-based operating system. But by next year, it will probably be readily available on the market. The only problem is, the enterprise won’t care. For one, the corporate world is too reliant upon Windows. And a new, Web-based operating system could be enough to turn some IT managers away. Chrome OS simply doesn’t have what it takes to be an enterprise success. This might sound odd, considering how important it is in the enterprise, but Internet Explorer could have a rough year in 2011. The enterprise is thinking seriously about other browsers. And as it does, it won’t be so reliant upon Internet Explorer. Moreover, the browser’s security woes continue to weigh heavily on the minds of IT decision-makers. Internet Explorer might reign supreme now, but that could quickly change next year. Every year, there is speculation about the possibility of Apple’s Mac OS X making strides in enterprise adoption. But like every other year, Macs simply won’t make a huge impact in the enterprise next year. Mac OS X doesn’t appeal as much as it could to corporate customers. And that won’t change, even with Mac OS X 10.7 Lion coming out next year. 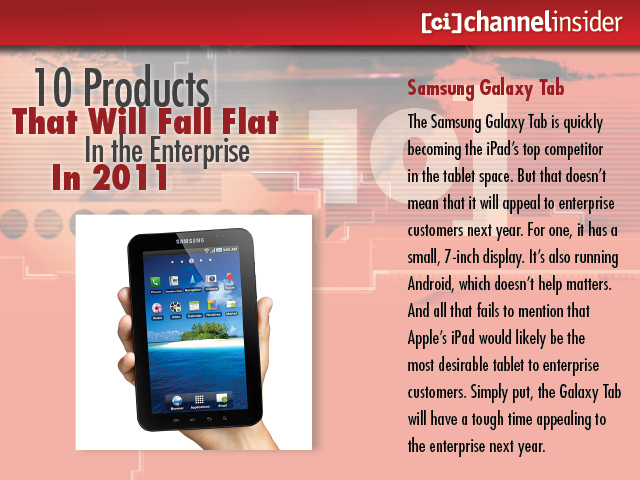 The Samsung Galaxy Tab is quickly becoming the iPad’s top competitor in the tablet space. But that doesn’t mean that it will appeal to enterprise customers next year. For one, it has a small, 7-inch display. It’s also running Android, which doesn’t help matters. And all that fails to mention that Apple’s iPad would likely be the most desirable tablet to enterprise customers. Simply put, the Galaxy Tab will have a tough time appealing to the enterprise next year.