Banking on its strong channel business, Microsoft showcased its new and improved mission at the recent Worldwide Partners Conference. Microsoft Aims to Make It Easier to Do Business With Redmond

In many of the keynotes held during the kick-off day at WPC, Microsoft executives talked of their desire to make it easier to do business with the company. They acknowledged that the channel hasn’t always had the best experience with Redmond, but in the coming years, Microsoft wants to fix that. One of the main demos during WPC 2015 was how Cortana can be used for more than just asking for definitions on new words. The company focused on how firms can use Cortana’s intelligence and big data to crunch information and provide valuable insight into how a particular division or an entire company is operating. HoloLens Has an Enterprise Appeal

Microsoft’s HoloLens virtual-reality headset is a decidedly enterprise-focused product, if the company’s presentations are any indication. During one keynote address, Microsoft showed how companies, with help from HoloLens, can design and place a 3D image in the world around them to see it in life size. The presentation was impressive and showed how HoloLens can help companies in the channel pitch wearables to clients. Talk of the cloud was everywhere at WPC 2015. Microsoft specifically talked up Azure and how the platform can be used by companies to expand productivity and efficiencies in the workplace. Microsoft also discussed Office 365 and Sharepoint as a means to break through some of the challenges companies face in getting more from their employees. 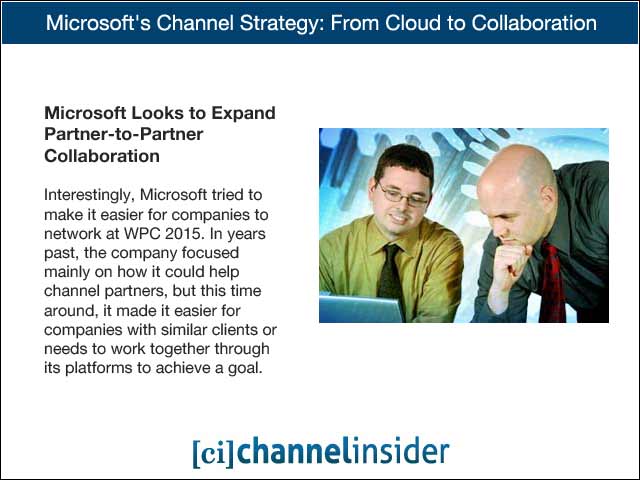 It’s Not Your Old-Fashioned Microsoft

If nothing else, Microsoft showed that it’s not the old, staid software giant of yesteryear. Microsoft has a vibrancy about it now and showcased that at all of its keynotes and even on the show floor. Microsoft talked up future-focused initiatives, seemed more agile, and generally shared a rosy picture for the future. One of the biggest challenges for channel partners has been the Surface tablet and Microsoft’s odd decision to limit its availability to only a handful of resellers. The company announced at WPC 2015 that it would commit to dramatically expanding its list of resellers in the coming months and will make Surface more broadly available in the enterprise. Office 365 Means Everything to Microsoft’s Future

Office 365 is clearly a major concern for Microsoft as it looks to expand its cloud and productivity efforts in the enterprise. The company talked up a new E5 plan that will include Skype for Business and enhanced enterprise tools, including Cloud PBX. Office 365 is a major money-making opportunity for Microsoft, and the company believes that with the channel’s help, it can generate billions of dollars in revenue from Office 365 alone. At this year’s WPC, the company discussed Windows 10 and why it’s the “most secure” operating system it’s offered yet, and discussed how it has beefed up security across its cloud platforms. Microsoft seems confident that it’s gotten security right, and it’s willing to stand by its word on that front. Satya Nadella Cares About the Channel

Satya Nadella’s address at WPC 2015 shared many interesting thoughts and ideas, including his vision for the future and why the cloud is so important. But perhaps most importantly, he seemed committed to working closely with the channel, being a better partner and, ultimately, listening to its needs.