The Android Market is growing at an astounding rate. But it’s hard to navigate, and most would agree that it doesn’t deliver all the functionality and reliability that consumers find in Apple’s App Store. If Google is to become the de facto leader in the mobile market, its Android app store will need to be better. Smartphones will obviously determine the future success of Android OS. Realizing that, now is not a time for Google to be complacent with its hardware strategy. The search giant needs to continue to find suitable vendors that want to offer devices for the software. And it needs to ensure that those devices perform as well (if not better) than the Droid X and Droid Incredible. When Google announced the release of Android 2.2 Froyo, most folks were excited. The only problem is, it has taken an inordinate amount of time for consumers to actually get their hands on the new software. And vendor desire to offer over-the-air updates hasn’t necessarily helped all customers get the software they want. Going forward, Google and its partners need to deliver a better OS rollout schedule. One issue many users have with Android OS 2.2 is that it lacks a simple design like that on the iPhone. In fact, some menus are hidden from view, while others are hard to find. Google needs to be more diligent with its software design and start making it easier for users to navigate its software. If it can do that, the company could go a long way in ensuring its future success in the mobile space. The little things come back and haunt Google and its Android OS. As mentioned, menus are sometimes hard to navigate. And being able to quickly switch from one application to another can be difficult. The issues Android OS 2.2 suffers from aren’t major in any way, but the minor problems tend to pile up over time. Android OS 2.2 delivers a far better typing experience than those offered in previous versions of the software. But it still has a long way to go if it’s going to be successful. One of the best aspects of iOS is that its virtual keyboard works so well. Users can quickly type out messages with ease. On Android OS 2.2 that isn’t the case. And some folks find that it’s quite difficult to use the keyboard. Going forward, Google needs to fix that. 7. Figure Out the Multimedia

Those looking for easy access to movies or videos on the iPhone can load up iTunes and get the job done. But that isn’t so easy on Android OS. In fact, Google doesn’t have its own iTunes competitor. Instead, it relies upon apps, like Amazon’s MP3 store, to deliver multimedia content to users. That’s a problem. Smartphone owners expect ease of use. And if they can’t get that from Google, they won’t be happy. 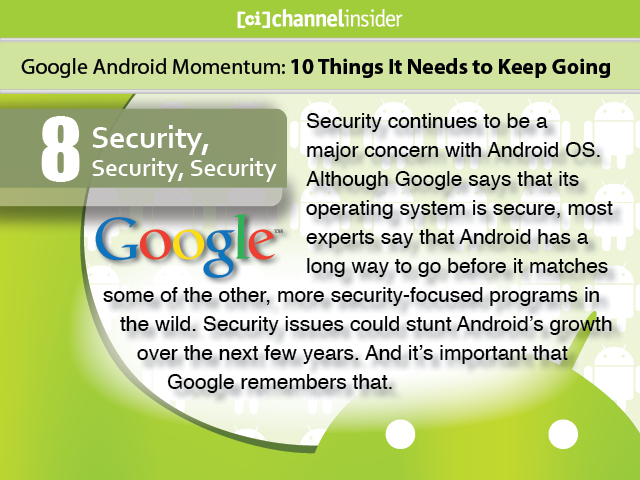 Security continues to be a major concern with Android OS. Although Google says that its operating system is secure, most experts say that Android has a long way to go before it matches some of the other, more security-focused programs in the wild. Security issues could stunt Android’s growth over the next few years. And it’s important that Google remembers that. Google says that Android 2.2 is the most corporate-friendly operating system it has released to date. And most would agree with that. But its mobile OS still has a long way to go before it can adequately compete with more capable enterprise-focused operating systems like BlackBerry OS. For now, Android OS 2.2 is still a consumer product. And the corporate world knows it. Whereas most people can pick up an iPhone and understand how it works after a few minutes, those who pick up an Android-based device will have some trouble for a while. The learning curve on an Android OS 2.2 product is quite high compared to some of the other platforms on the market. Google needs to address that going forward. The easier an operating system is to use, the better it will be for Google and its platform.