1. The Cloud Is Coming 1. The Cloud Is Coming

Microsoft has finally made its first move to the Web with Office 2010. The company’s new productivity suite features Office Web Apps, a collection of its programs online. It was a smart move on Microsoft’s part to offer Web apps. But whether or not it will be enough to fend off competitors, Google Docs and Zoho Docs remains to be seen. The software company isn’t making it so easy for users to access Web Apps. Consumers will be able to get it for free, but enterprise customers will need to choose from a SaaS edition on Microsoft’s servers or a version that comes with Office 2010. Microsoft must streamline its cloud offerings. It’s a necessity in today’s marketplace. 2. Not Everyone Needs Another Office

The problem with Office going forward is that it’s an unbridled success. In the past, that hasn’t mattered so much, since Microsoft has been able to update the software enough to justify another purchase. But going forward, some might be hard-pressed to see why they should buy another Office license when the version of the software they have works just fine. Office 2010 might be a fine version of the software that some companies and consumers might want. But for most, the thought of paying hundreds of dollars for a new solution that does little to improve upon the predecessor is a hard sell. 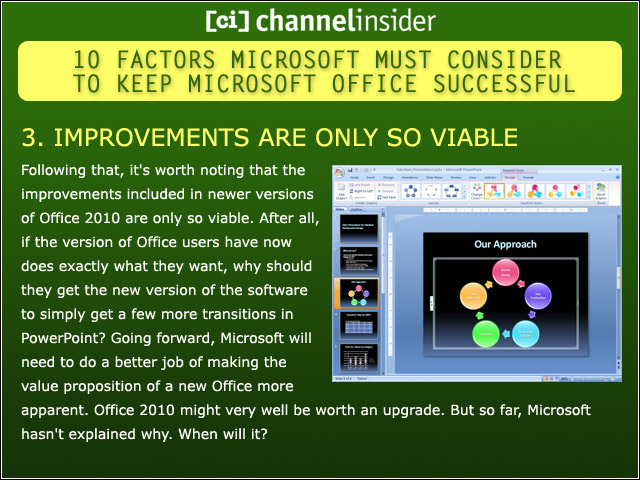 3. Improvements Are Only So Viable

Following that, it’s worth noting that the improvements included in newer versions of Office 2010 are only so viable. After all, if the version of Office users have now does exactly what they want, why should they get the new version of the software to simply get a few more transitions in PowerPoint? Going forward, Microsoft will need to do a better job of making the value proposition of a new Office more apparent. Office 2010 might very well be worth an upgrade. But so far, Microsoft hasn’t explained why. When will it? 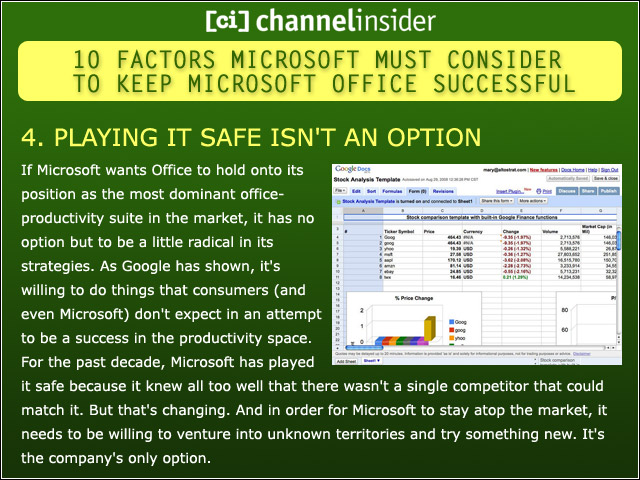 4. Playing It Safe Isnt An Option

If Microsoft wants Office to hold onto its position as the most dominant office-productivity suite in the market, it has no option but to be a little radical in its strategies. As Google has shown, it’s willing to do things that consumers (and even Microsoft) don’t expect in an attempt to be a success in the productivity space. For the past decade, Microsoft has played it safe because it knew all too well that there wasn’t a single competitor that could match it. But that’s changing. And in order for Microsoft to stay atop the market, it needs to be willing to venture into unknown territories and try something new. It’s the company’s only option. Make no mistake that the Web is the future of office productivity. But so far, there isn’t a clear-cut winner. Google Docs might have a big head start, but the software still pales in comparison to Office. Just about every company that requires Excel will find little reason to use Google Docs, even though it’s free. Realizing that, the race is on for one company to deliver a fully capable productivity suite. Not only must it be able to deliver the same functionality as current versions of Office, each of the apps included in the suite must work just as enterprise customers expect. If it can win over the enterprise, it can win the productivity market. 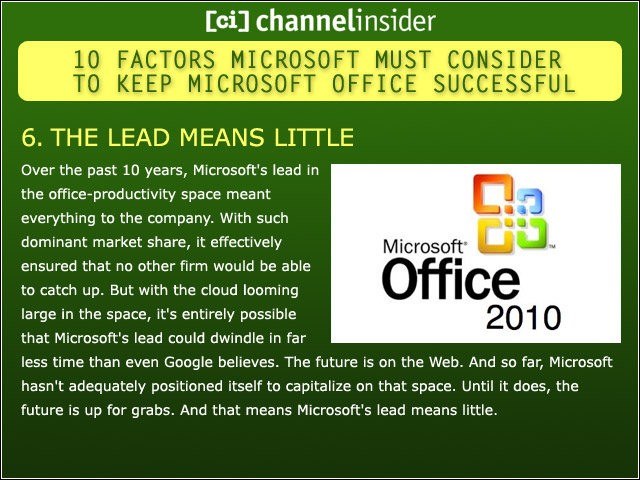 Over the past 10 years, Microsoft’s lead in the office-productivity space meant everything to the company. With such dominant market share, it effectively ensured that no other firm would be able to catch up. But with the cloud looming large in the space, it’s entirely possible that Microsoft’s lead could dwindle in far less time than even Google believes. The future is on the Web. And so far, Microsoft hasn’t adequately positioned itself to capitalize on that space. Until it does, the future is up for grabs. And that means Microsoft’s lead means little. 7. Excel Is the Key to Success

Excel is the single application that means most to Microsoft’s success or failure in the coming years. A solid spreadsheet application is what consumers and especially enterprise customers are looking for. If it’s powerful enough and can compete with Excel, Microsoft is in for trouble. So far, the company hasn’t needed to worry, since no other spreadsheet program could compete with Excel. But if and when it is finally matched, the company will need to find a way to overcome the contender. To be safe, Microsoft must continue to innovate with Excel. It’s the main reason why any company sticks with Office. Word just isn’t the most important application in Microsoft’s Office suite. Although the word processor is used widely in educational and enterprise settings, it’s being matched by Google Docs right now. Of course, that’s to be expected. Word isn’t the most elaborate application. And thanks to Microsoft’s inability to bring more effective solutions to the product, there’s little chance of it being matched at any point in the future. Word might be a fine app for some, but if Microsoft wants Office to continue its success, it shouldn’t waste its time trying to keep it alive. Microsoft must constantly consider its options going forward. Although Office generates billions of dollars in profit for the company, it needs to determine if it’s really the most important application for its future. Yes, Office is a major reason why Microsoft is such a success. But the market is changing and it’s up to the software giant to meet those changes head-on. If it tries to stick with Office for too long and fails to adequately deliver the other software services people want, it will cut off its nose to spite its face. That’s never a good thing. 10. How Will Google Respond?

Google is central to the success or failure of Office. If the company does a fine job delivering better versions of Google Docs in the future, Microsoft will be in trouble. If the search giant decides to invest more of its time and effort elsewhere, Microsoft will be able to coast with Office for the foreseeable future. As much as Microsoft’s future is in its own hands, there is a major component that rests in the success or failure of Google Docs. That can be disconcerting. But it’s the reality right now. And Microsoft must accept that.