Intel made it clear when it acquired McAfee that it wants to be a major player in the mobile-devices space. And it plans to make McAfee important in its mobile-security strategy. Realizing that, it might not be long before Intel starts dominating the netbook market even more than it already does with its new focus and improved offering. Netbooks could be dying out, but Intel could be the company to keep them hanging around a little longer.

2. The Mobile Market Is On Notice

Intel wants to make a big play for the smartphone market. Currently, ARM provides the vast majority of processors in that space. And Intel hasn’t been able to capitalize on it. But with a renewed focus on the smartphone space and its new mobile services, it won’t be long before Intel takes aim at mobile phones. 3. Symantec Should Be Concerned

Symantec is one of the few firms in the software market that should be concerned about Intel. The company fired a shot over Symantec’s bow by acquiring McAfee. And it will likely use its vast cash reserves to trump the company’s security services every chance it gets. Symantec will need to find a way to respond, but it’s dwarfed in size by Intel. 4. The iPad Is In the Crosshairs

Intel is planning to make a major play for the tablet space. Once it does, the company will likely work with companies that want to take Apple’s iPad down. It doesn’t mean that they will or that they will have the kind of success that Steve Jobs and Company enjoys, but with Intel’s technology, Apple will be forced to keep up&#151or else. 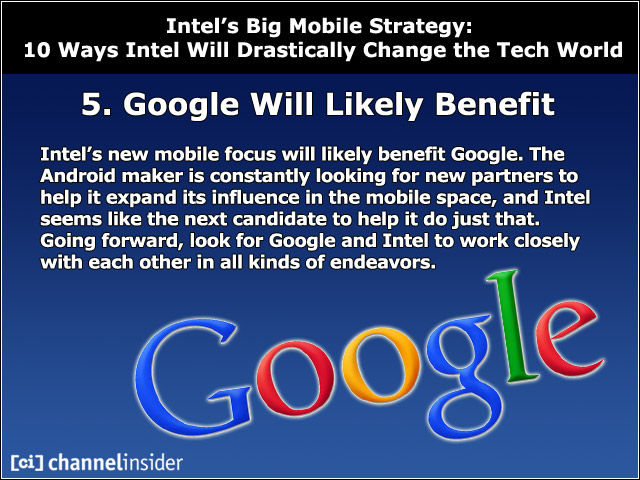 Intel’s new mobile focus will likely benefit Google. The Android maker is constantly looking for new partners to help it expand its influence in the mobile space, and Intel seems like the next candidate to help it do just that. Going forward, look for Google and Intel to work closely with each other in all kinds of endeavors. Make no mistake that Intel finds the enterprise to be extremely valuable. In fact, the company believes that the space is the ticket to its success going forward. Realizing that, it will almost undoubtedly target the enterprise with all of its initiatives. That doesn’t mean that it will forget about consumers&#151it won’t&#151but it does mean that the corporate world will play a role in its plans. HP might also be central to Intel’s plans going forward. As the leading provider of processors in the desktop and laptop markets, Intel has the “in” that it needs to work closely with HP and all of its future mobile products. That alone could set ARM back quite a bit in the processor space, and help Intel show other vendors that it has the product they want. If HP plans to work with Intel, Dell must follow suit. As the companies have shown time and again in today’s tech space, HP is able to provide the products and services that customers want far more effectively than Dell can. And if it turns out that Intel offers a better platform in the mobile market than other offerings, Dell must include its technology in its own products. The future is in doubt for Dell. The last thing it wants to do is give its biggest competitor an advantage in any market. Speed will mean the difference between success and failure for Intel. Realizing that, the company’s latest processors must deliver better performance than the competition. If they do, Intel will find itself in the sweet spot for processor companies: it will have cornered the laptop and desktop markets, as well as the mobile space. That alone could help the company enjoy the kind of success even it hasn’t mustered so far. The Cisco Cius is arguably the most important enterprise-focused tablet that has ever been announced. But with that importance comes the possibility on Cisco’s part to capitalize on Intel’s new mobile strategy. After all, the corporate world believes in Intel. And if it provides the kind of service many hope it will, it might not be long before Cisco can use that to its advantage and make it a selling point in its own product.