1. It’s All About Design 1. It’s All About Design

One of Apple’s key success factors is its superior product design. If companies want to make a splash at CES, they need to stop talking about design and just deliver it. The best-looking products will win out — every time. 2. Be First with a Huge Improvement

Apple has shown that being the first to announce a major improvement makes all other products look obsolete in comparison. Apple did it with the iPhone’s touch screen, Siri, and many other improvements. What company at CES will do the same? Uniqueness matters. And yet, most of the companies at CES are making products that look the same as all the other tech out there. They need to focus on just how important uniqueness really is. Differentiating a product is another art form that Apple understands and most of the companies at the Consumer Electronics Show just don’t. It’s fine to have a smartphone running Android, but what can a company do to make it special? So far, none of the firms at CES have decided that. And it’s about time they do. 5. Be Simple But Flashy

Apple has found the way to deliver both simple and flashy product in one. It ditches plastic for the most part for unique materials such as glass or aluminum. Simple lines and form factors contribute to the effect. It’s a lesson other companies should learn. 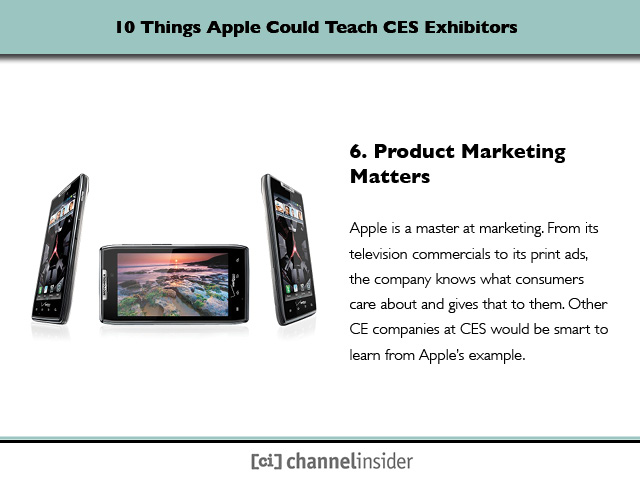 Apple is a master at marketing. From its television commercials to its print ads, the company knows what consumers care about and gives that to them. Other CE companies at CES would be smart to learn from Apple’s example. 7. Being an Exhibitor Isn’t Enough

Apple isn’t just an exhibitor at events; the company delivers keynotes to promote its products. If a company at CES combining its exhibit with other promotional efforts, it won’t do as well. 8. Save the Best Announcements for Another Day

CES is great, but it’s overcrowded. Making your product or announcement stand out is nearly impossible. Apple, on the other hand, typically waits for CES to be over before announcing a new product, and Apple’s product then stands alone. Over the last several years, CES’ pomp and circumstance has bred a mentality among exhibitors that they need to show off anything and everything. Apple, meanwhile, only shows off what it must, and leaves everything else to the imagination. Instead of going to CES, maybe companies should spend their money elsewhere. After all, there are so many companies there already that it’s hard to stand out. Perhaps the smart move is to simply wait for the show to end and offer up some products then. It works for Apple.