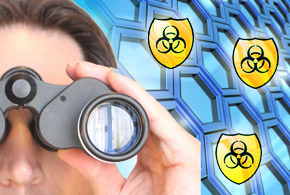 More Vulnerabilities Than Ever

The Common Vulnerabilities and Exposures (CVE) system reported about 9,400 new vulnerabilities, with two-thirds of them involving networks. More Unique Attacks Than Ever

Of 1.7 trillion attacks made against intrusion prevention systems, 37 million of them were unique. That’s a 100% increase from 2013. The Nuclear, Angler and Magnitude exploit kits together form almost 90% of the “in the wild” exploit kits. The Angler exploit kit is the most prevalent—accounting for approximately 60% of all exploit kits. Embedded Systems Are Being Targeted

In 2014, Dell saw a twofold increase in SCADA (supervisory control and data acquisition) attacks, compared with 2013. Buffer-flow vulnerabilities continue to be the primary vehicle of attack. The Heartbleed buffer over-read vulnerability, disclosed in April 2014, potentially affected about 17% (about 500,000) of the secure Web servers on the Internet. Well-known zero-day vulnerabilities were released, with Shellshock vulnerabilities exploited by attackers within hours of the initial disclosure on Sept. 24, 2014. Within a week, millions of attacks and probes per day were observed. Encrypted Connections on the Rise

Michael Vizard
Michael Vizard is a seasoned IT journalist, with nearly 30 years of experience writing and editing about enterprise IT issues. He is a contributor to publications including Programmableweb, IT Business Edge, CIOinsight, Channel Insider and UBM Tech. He formerly was editorial director for Ziff-Davis Enterprise, where he launched the company’s custom content division, and has also served as editor in chief for CRN and InfoWorld. He also has held editorial positions at PC Week, Computerworld and Digital Review.
Previous articleNew MSP Consortium Releases RMM Platform Tool
Next articleIT Jobs Market Strong, Security Pros in Demand