A VMware study finds that most firms won’t have Windows 10 on three-fourths or more of their machines until the end of 2017 at the earliest. Windows 10 migration is at the top the list, at 64%, but maintaining existing Windows 7/8 support is at 56%. PC hardware refreshes came in at 51%, followed by virtual desktop infrastructure (VDI) at 48%. A full 74% cited the eventual obsolescence of Windows 7/8. Just under half (49%) cited the fact that a Windows 10 upgrade is included in their enterprise license agreement. Another 43% said Windows 10 would work better with new hardware. Despite the capabilities of Windows 10, more than half (58%) said there would be no change to their approach to managing Windows. Only 17% said they would make use of enterprise mobility management (EMM), while 14% said they would move more management functions to the cloud. On average, respondents said they would have 75% or more of the systems they manage running Windows 10 in the next two years. SMBs are slightly more aggressive about Windows 10 deployments. 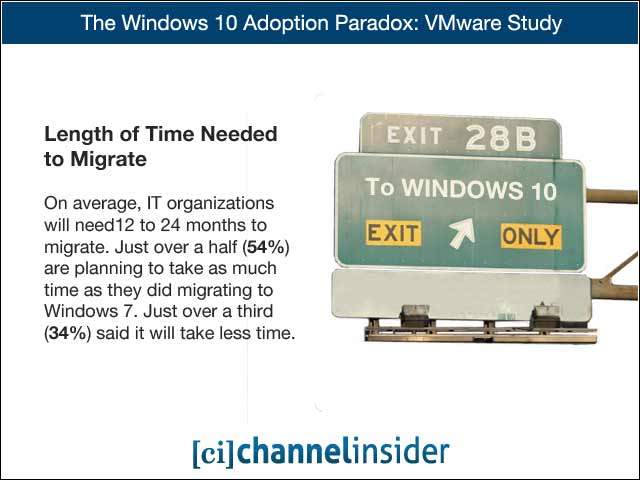 Length of Time Needed to Migrate

On average, IT organizations will need12 to 24 months to migrate. Just over a half (54%) are planning to take as much time as they did migrating to Windows 7. Just over a third (34%) said it will take less time. 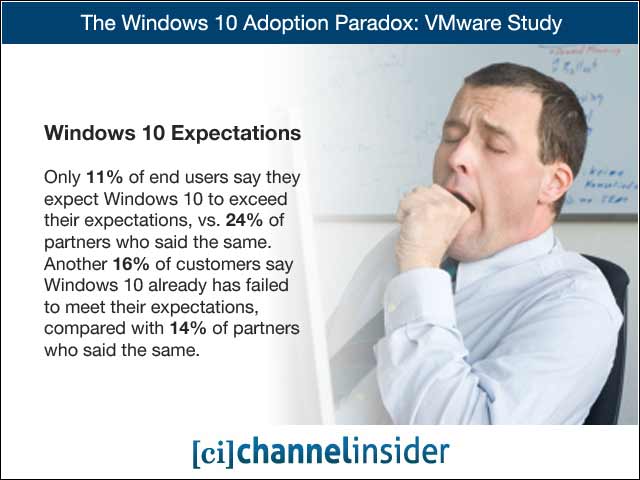 Use of IT Professionals’ Time

Only half said they would prefer to spend their time on Windows 10 migrations, compared with cleaning out their garage (26%), helping a friend move (15%), getting a root canal (5%) or sitting in traffic (4%).

Michael Vizard
Michael Vizard is a seasoned IT journalist, with nearly 30 years of experience writing and editing about enterprise IT issues. He is a contributor to publications including Programmableweb, IT Business Edge, CIOinsight, Channel Insider and UBM Tech. He formerly was editorial director for Ziff-Davis Enterprise, where he launched the company’s custom content division, and has also served as editor in chief for CRN and InfoWorld. He also has held editorial positions at PC Week, Computerworld and Digital Review.
Previous article
Inside the OpenStack Distribution Wars
Next article
Navigating the Software Licensing Conundrum