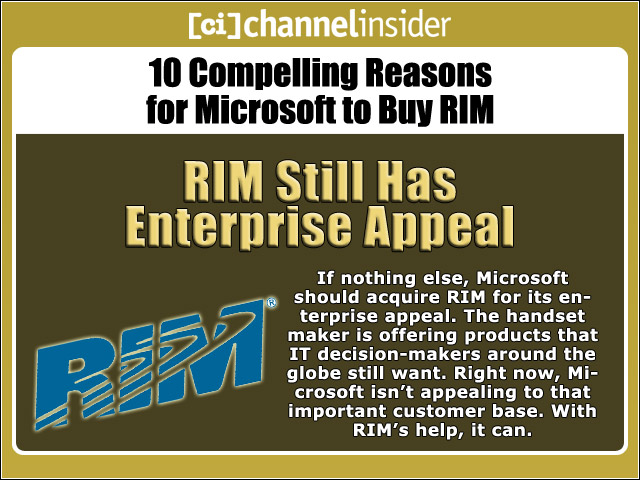 If nothing else, Microsoft should acquire RIM for its enterprise appeal. The handset maker is offering products that IT decision-makers around the globe still want. Right now, Microsoft isn’t appealing to that important customer base. With RIM’s help, it can. Windows Phone 7 just isn’t working out. Consumers want nothing to do with the platform, and enterprise users are disappointed by it. However, if Microsoft buys RIM, it will have many more options like incorporating Windows Phone 7 into BlackBerrys or running both OSes for different market segments. The Shareholders Would Go for It

Now is a prime time to buy RIM. The company isn’t performing as well as it could, and shareholders are concerned that management isn’t doing a good enough job of preparing it for the future. At this point, many shareholders would be happy to sell off their share to Microsoft at a premium. Microsoft would have several options available to it if were to buy RIM. However, the best option for the company would be to offer Windows Phone 7 to consumers exclusively, and offer up BlackBerry 7 OS to enterprise users. By doing so, Microsoft can offer the right products for the right groups. The Employees Need a Jolt

Recently, an anonymous RIM employee wrote an open letter criticizing the company’s management for their inability to adapt to the changing times. For Microsoft, that can be an opportunity to reinvigorate RIM’s employees. With nearly 50% of the market, Google’s Android is a front-runner. With the BlackBerry’s help, Microsoft can go a long way in stopping Google’s landslide. If the company can make its Nokia partnership work and combine that with RIM’s worldwide market share, Microsoft can establish itself in the eyes of customers and advertising partners&#151a key sector for the company&#151as a real competitor. Over the last year, Apple’s iPhone and iPad have been catching on with enterprise users. However, if Microsoft were to acquire RIM, the software giant can go a long way in stopping Apple from becoming a corporate threat. Will it stop things entirely? Probably not. But it might be able to at least slow Apple’s progress. RIM’s financials are appealing. The BlackBerry maker generates billions of dollars in revenue and millions in profit each quarter. From a financial perspective, no one would blame Microsoft for acquiring RIM. It Has a Tablet Strategy

Microsoft doesn’t have a good tablet strategy. Right now, it looks like most Windows tablets won’t even come out until next year. That’s a problem. However, RIM has a tablet and a tablet strategy, even though it’s not selling as well as it could It might not be an iPad-killer, but it’s at least better than Microsoft’s ideas.