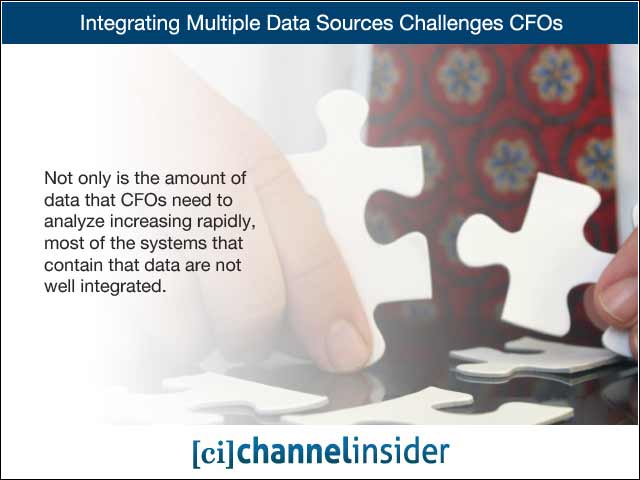 Not only is the amount of data that CFOs need to analyze increasing rapidly, most of the systems that contain that data are not well integrated. Amount of Data Being Accessed

Nearly one-third of CFOs anticipate a 26% to 50% increase in the amount of data their teams will have to manage over the next five years, while more than a third anticipate an increase of more than 50%. In Pursuit of the Truth

Just over a third (38%) of CFOs said their organizations have been able to achieve a single source of truth, with another 45% saying this is a work in process. How Data Is Gathered

Nearly half (47%) manually aggregate data, while 32% rely on ERP applications, 27% have a business intelligence application for accessing a data warehouse and 24% have done custom integration of apps. Only 5% of CFOs gave their team a top ranking in integrating this data. Just less than a third (30%) are managing data from five or more source systems. A full 69% of CFOs surveyed believe that keeping data in silos is one of the biggest financial mistakes that most companies make. A full 66% of CFOs reported that the chief operations officer (COO) is the executive they work with most closely besides the CEO. HR received the second highest ranking at 34%, followed by the CIO at 30% and the CTO at 29%. The majority (54%) of CFOs do make use of company-wide key performance indicators, while 33% said this is a work in progress and 13% reported not having any company-wide KPIs. 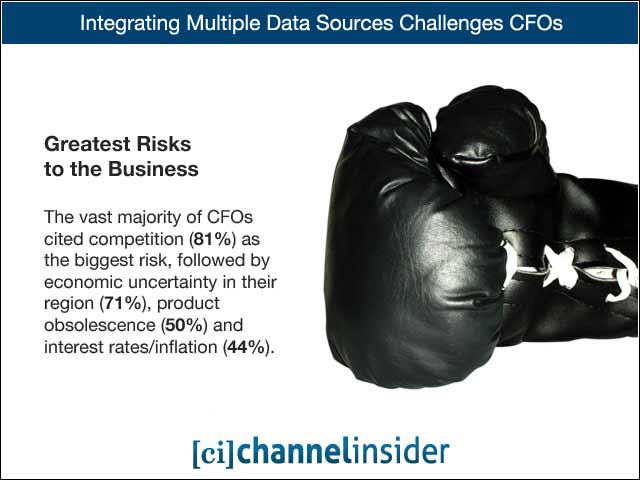 Greatest Risks to the Business

The vast majority of CFOs cited competition (81%) as the biggest risk, followed by economic uncertainty in their region (71%), product obsolescence (50%) and interest rates/inflation (44%). Factors CFOs said they consider in their planning include interest rate increases (48%), expected merger and acquisition activity (38%) and cyber-security (32%). Nearly 64% believe the U.S. presidential elections will have little-to-no impact on their company’s business and 42% believe the elections will have very little-to-no impact on the global economy. However, CFOs pointed to political volatility (29%) and China’s current economic situation (26%) as higher concerns.