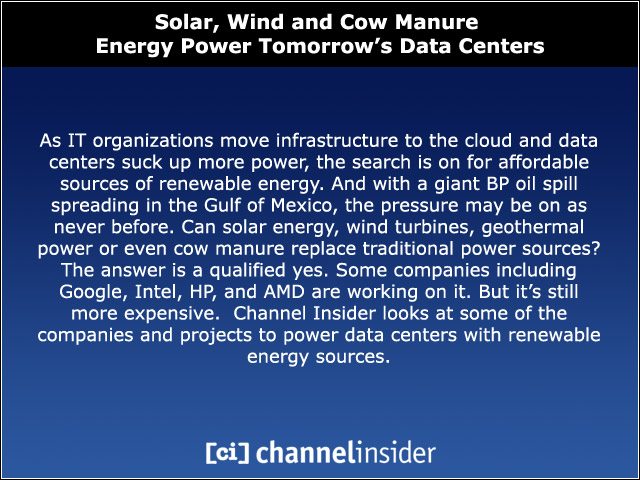 As IT organizations move infrastructure to the cloud and data centers suck up more power, the search is on for affordable sources of renewable energy. And with a giant BP oil spill spreading in the Gulf of Mexico, the pressure may be on as never before. Can solar energy, wind turbines, geothermal power or even cow manure replace traditional power sources? The answer is a qualified yes. Some companies including Google, Intel, HP, and AMD are working on it. But it’s still more expensive. Channel Insider looks at some of the companies and projects to power data centers with renewable energy sources. OK, so it’s still just a theory. HP Labs presented research looking at the use of cow manure from a dairy farm to power the data center. The hypothetical scenario shows how a farm of 10,000 dairy cows could generate 1MW of electricity, enough to power a typical modern data center while still having energy left over for use on the farm. Not to mention, a dairy farm of 10,000 dairy cows also generates 100,000 gallons of milk a day for that additional revenue stream. OWC.net installed a giant wind turbine in 2009. It’ generates 1,200,000 kilowatt hours per year, more than twice what the OWC.net data center needs to operate every year. The company sells surplus power back to the Woodstock, Illinois. Back up power can be provided by the municipality, the company’s natural-gas powered generator and a UPS system. i/o Data Centers, a provider of enterprise hosting and co-location services, announced plans last year to cover its 11-acre roof in Phoenix, with solar panels. The panels can generate up to 4.5 megawatts of power. Last year Intel installed 64 Sharp solar panels at its Rio Rancho, New Mexico chip-making facility in a project designed to determine the viability of using that renewable resource to supply some of its power needs. Google’s business is run on data centers so it’s no surprise this company’s philanthropic arm is looking to fund renewable and affordable energy sources. It’s efforts include investments in companies like eSolar [http://www.esolar.com ], a solar thermal power start up, a few enhanced geothermal power start ups, and even a plan to look at ocean water for power and cooling of data centers Google sums up its efforts to find affordable renewable energy here.