1. The BlackBerry Won’t Make It 1. The BlackBerry Won’t Make It

RIM’s BlackBerry is a great product, but it’s losing market share fast. What’s worse, it comes with a design that most people — including enterprise users — just don’t like anymore. Apple’s iPhone and Android handsets are taking over. RIM doesn’t have a solid tablet strategy. The company’s PlayBook was caught between consumers and enterprise users so no one bought it. Now, Heins says he wants to push forward with tablets without clearly defining who his customers are. It’s a major issue. 3. He Doesn’t Think the Issues Are Major

Heins is under the false hope that RIM can simply turn things around with a few changes here and there. In fact, he told investors recently that he doesn’t think his company needs major changes. Really? Can Heins do anything to stop the Apple juggernaut? Oddly, he believes that he can stand up to the “other fruit company,” as he calls Apple. But he can’t. Apple is encroaching on RIM’s enterprise turf. As more companies switch to iPhones and ditch BlackBerry devices, Heins will have to wave the white flag. 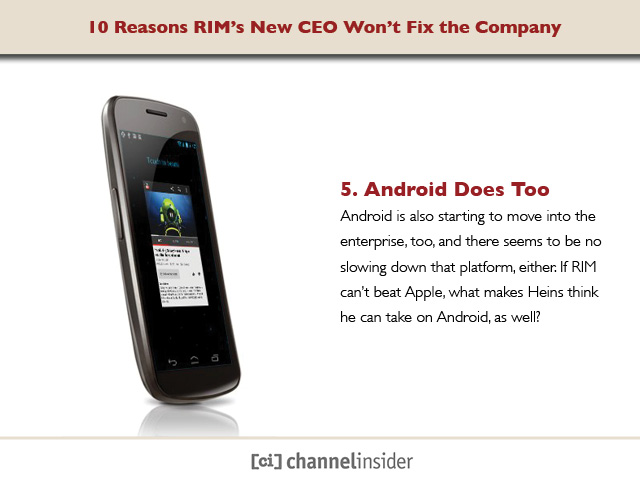 Android is also starting to move into the enterprise, too, and there seems to be no slowing down that platform, either. If RIM can’t beat Apple, what makes Heins think he can take on Android, as well? 6. Licensing Is A Double-Edged Sword

Heins has said that he plans to license BlackBerry 10. At first glance, it might sound like a good idea, since RIM could generate significant cash from licensing deals. However, licensing software will hurt RIM’s own hardware sales and make its own products less “special,” – not a good thing.

7. The Enterprise Is Losing Faith

The corporate world has staunchly supported RIM for years. But recently companies have been increasingly turning to iOS, Android, and even Windows Phone 7. The enterprise is losing faith in RIM. And not even Heins has a plan to address that. Moving to the consumer side, RIM suffers from one major issue: customer perception. Today’s consumers view RIM as an outdated mobile giant that won’t be able to appeal to their needs in the coming years. And unless Heins can change that, there’s no saving the company. Heins has been right to acknowledge his company’s issues in the U.S. But what he doesn’t seem to understand is that anything short of a major shift in strategy will do nothing to change RIM’s fortunes the States. Let’s just say that Heins has a chance to actually fix RIM. Let’s say that his plans could work. Even in that case, he’ll likely never have a chance. As RIM’s shares continue to plummet, other companies will see value in acquiring the firm.