Mark Hurd is now Oracle’s co-president and brings all of the experience and expertise that he gleaned during his time as HP CEO with him. That’s bad news for HP, and it could have a direct impact on the company’s ability to attract enterprise customers. After all, Hurd was a corporate-friendly CEO. Why wouldn’t he be a corporate-friendly president?

2. Oracle Is That Much Stronger

Oracle is now extremely powerful. In fact, the company has the single person running it that was able to revive HP’s ailing business. In Hurd, Oracle also has someone who knows where the competition’s weaknesses are. Oracle was dangerous before. But with Hurd, it’s even more worrisome. HP has yet to find itself a CEO. That’s not a good thing. As Mark Hurd’s departure has shown, the people running HP right now aren’t as capable as their predecessor. In fact, it’s hard to believe that Hurd would have agreed to the 3PAR deal. HP needs a CEO. Without one, the company is putting itself in a position to spiral out of control. 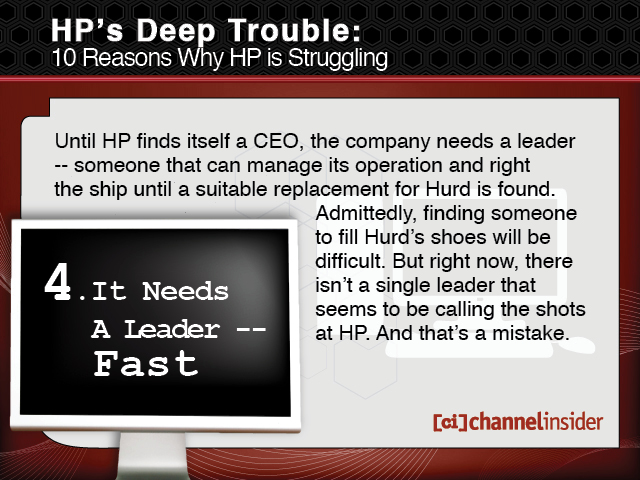 Until HP finds itself a CEO, the company needs a leader — someone that can manage its operation and right the ship until a suitable replacement for Hurd is found. Admittedly, finding someone to fill Hurd’s shoes will be difficult. But right now, there isn’t a single leader that seems to be calling the shots at HP. And that’s a mistake. HP is allowing its past leadership problems to impact its decision making. Prior to Mark Hurd arriving at HP, the company was in trouble. Its leadership was in disarray, it didn’t know how to compete in the changing tech landscape, and it needed someone to take control. Hurd was that person. But he’s gone. And now it’s time for HP to look towards the future for its next viable leader. 6. Finding A Leader Is Extremely Difficult

The issue at HP, and one of the main reasons why the company is in such trouble, is that it’s competing in a variety of different markets. HP can easily find someone that can help its computing business, and it’s likely that it can find a suitable enterprise-focused leader. But finding someone that can manage its many divisions and make sound business decisions across those industries is extremely difficult. 7. The Board Makes Poor Decisions

It’s hard to debate the fact that HP’s board is making some poor decisions. First, it allowed Hurd to get away without protecting HP. Secondly, it paid far too much for virtual-storage company 3PAR in its worry over, of all companies, Dell. The board is the reason HP is in deep trouble right now. And it’s time that every HP stakeholder starts realizing that. HP wanted 3PAR badly after Dell announced that it would try to acquire the virtual-storage firm. But now that HP has it, what will the company do with 3PAR? The acquisition will likely help bolster HP’s enterprise offerings, but the chances of it seeing a positive return on that investment anytime in the near future seem slim. That’s not a good thing. And it once again speaks to the mistakes the company has made since Hurd left HP. It was Mark Hurd’s idea to acquire Palm. And he was the person with the vision for that company. Now, all of the previous Palm employees are gone. And it’s HP’s job to find value in the company. That won’t be easy, especially with the issues Palm had prior to the acquisition. Palm is a major thorn in HP’s side now.