Apple’s iPhone is an integral component in the company’s success. But Android continues to solidify its market position. Will the smartphone market get bigger, ensuring Apple can continue to post strong sales? Maybe, but the stronger Android becomes, the worse it will be for Apple over the long-term. Currently, Android-based tablets haven’t been able to score significant market share in the tablet market. But in 2012, that’s expected to change as more consumers enter the space and decide to opt for an iPad alternative. Just look at the Amazon Kindle Fire. If that happens, it will hurt Apple. 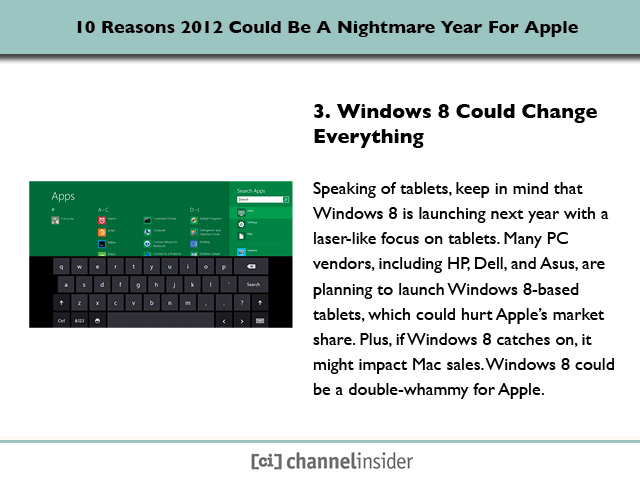 3. Windows 8 Could Change Everything

Speaking of tablets, keep in mind that Windows 8 is launching next year with a laser-like focus on tablets. Many PC vendors, including HP, Dell, and Asus, are planning to launch Windows 8-based tablets, which could hurt Apple’s market share. Plus, if Windows 8 catches on, it might impact Mac sales. Windows 8 could be a double-whammy for Apple. Over Apple’s history, the only effective CEO has been Steve Jobs. Now that Jobs is gone and Tim Cook is in charge, 2012 could either be a year of milestones for the new CEO or a nightmare. All eyes will be on Tim Cook. 5. Can iCloud Get Off the Ground?

iCloud is central to Apple’s future plans, including integration into its long-rumored television. So, if iCloud can’t break out from a product that only some Apple customers use into something mainstream, it could scuttle many of the company’s long-term plans. 6. PCs Are Catching Up to the MacBook Air

Apple’s MacBook Air is the gold standard in ultra-portable laptops, offering an ultrathin design and solid state components. The only issue is, Ultrabooks are starting to gain some steam, and most vendors, including HP, Acer, and others, believe that they will dominate the PC market next year. What does that mean for Apple’s MacBook Air? Although Apple and Google have been able to succeed together over the years, as their operations become increasingly entangled, it won’t be so easy for the companies to keep that going. Google and Apple are going head-to-head in mobile operating systems, advertising, and countless other markets. If Google continues its rise in 2012, Apple could be in for trouble. 8. Samsung Could Continue to Do Well

Interestingly, in the third quarter, Samsung sold more smartphones worldwide than Apple. Examine sales trends over the last year, and you’ll find that Samsung device sales are skyrocketing. How will that affect Apple in 2012? 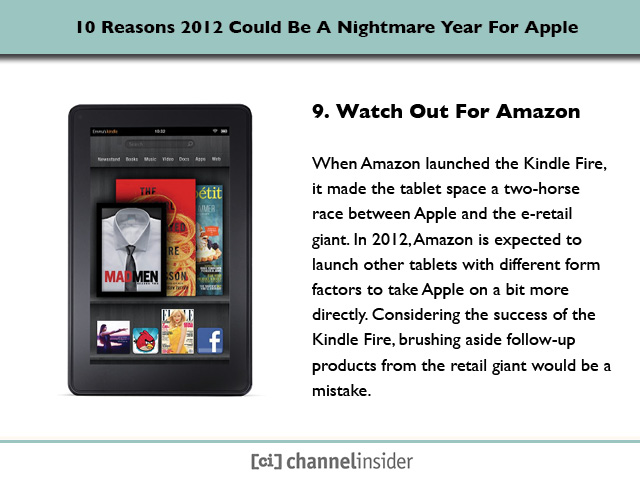 9. Watch Out For Amazon

When Amazon launched the Kindle Fire, it made the tablet space a two-horse race between Apple and the e-retail giant. In 2012, Amazon is expected to launch other tablets with different form factors to take Apple on a bit more directly. Considering the success of the Kindle Fire, brushing aside follow-up products from the retail giant would be a mistake. 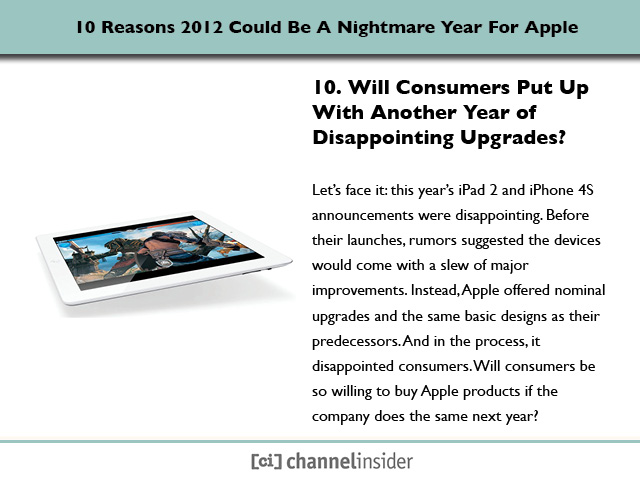 10. Will Consumers Put Up With Another Year of Disappointing Upgrades?

Let’s face it: this year’s iPad 2 and iPhone 4S announcements were disappointing. Before their launches, rumors suggested the devices would come with a slew of major improvements. Instead, Apple offered nominal upgrades and the same basic designs as their predecessors. And in the process, it disappointed consumers. Will consumers be so willing to buy Apple products if the company does the same next year?