Intel’s perennial competitor in the PC and server processor markets, AMD has always been able to put a special kind of hurt on Intel when it comes to the innovation and partnering footrace. Most recently it inked a deal with IBM to power its new line of Blade Servers. One of the many competitors vying for the smartphone market at the moment, Texas Instruments has long stoked the flames of an intense rivalry with Intel over markets involving semiconductors for smaller form factors. A big player in the mobile chip market, Qualcomm has been experiencing quite a lot of success with its Snapdragon processors for smartphones and netbooks, much to the chagrin of Intel muckity mucks. Samsung has its own brand of low-power consumption processing&#151the Hummingbird&#151to go toe-to-toe with the Snapdragon and keep Intel spread thin fighting another challenger for the mobile processing market. Snapdragon and Hummingbird are based on ARM’s CPU architecture, as are a number of mobile processors these days. ARM has pretty much owned Intel in the smartphone market, an irritant to Intel chiefs that likely spurred the company’s recent acquisitions of McAfee and Infineon’s wireless division to gear up for a showdown. 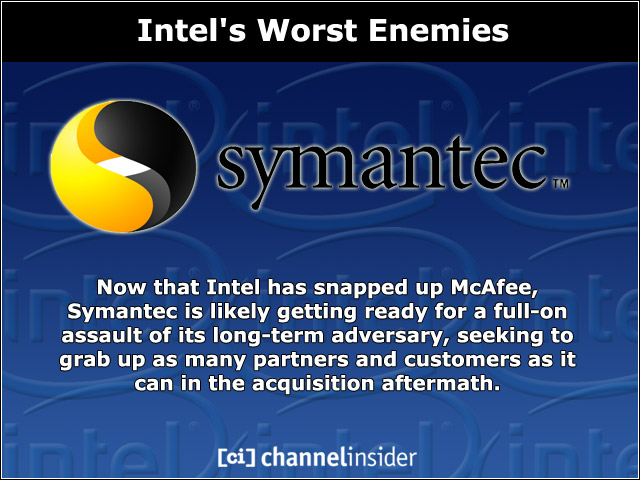 Now that Intel has snapped up McAfee, Symantec is likely getting ready for a full-on assault of its long-term adversary, seeking to grab up as many partners and customers as it can in the acquisition aftermath.