SDN Will Transform the Delivery of IT Services 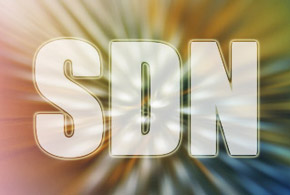 When it comes to IT these days most organizations are trying to become more agile. The problem they face in attaining that agility is that while a virtual machine can be provisioned in minutes, it still takes weeks to provision the associated subnets and VLAN resources.

To solve that problem, IT vendors are pouring millions of dollars into the development of software-defined networks that will turn networking into a programmable resource that can be provisioned in a matter a minutes, much like a virtual machine.

There are essentially three major SDN camps. Network hardware vendors such as Cisco are investing in SDN software that leverages the proprietary ASICs that differentiate the company’s network hardware. At the same time, providers of virtual machine software such as VMware are investing in SDN as part of larger strategy to create software-defined data centers. Finally, a significant portion of the networking industry is rallying around open-source projects such as OpenFlow and Project OpenDaylight as part of an effort to forever separate networking software from dependencies on the underlying network hardware.

Solution providers such as OneNeck IT Solutions are betting that continuing to be aligned with networking leader Cisco will give them an edge in terms of making the transition to SDN.

“As a longtime partner, we think the Cisco approach will give us the most market reach,” said Eric Lehto, director of technology at OneNeck IT Solutions. “SDN will give IT a lot more business agility, but there’s still a long way to go.”

Others, however, expect SDN will require a more nuanced approach. Given the proliferation of SDN models, Chris Patterson, vice president of product management for NaviSite, a cloud service provider that is a unit of Time-Warner, said there will ultimately be a need to support multiple types of SDN.

“SDN moves us beyond the physical limitations of the network,” Patterson said. “As hypervisors become a commodity, this will allow us to add value above the infrastructure layer.”

Even vendors such as Hewlett-Packard that are big proponents of open-source technologies are hedging their bets. While HP avidly supports OpenFlow and Project OpenDaylight, it also just announced an alliance with VMware under which it is bundling VMware EVO:RAIL software from VMware with its servers to create a turnkey SDN platform. At the same time, HP just launched a Distributed Cloud Network (DCN) offering based on its OpenFlow-compatible routers, switches and controllers and wide-area network (WAN) gateways.

“Individual customers have unique requirements”, said Jacob Rapp, global marketing leader for HP Networking. “Our approach will be to federate a lot of these environments over a WAN gateway.”

Separating networking software from hardware using open-source software has major implications for the channel. Customers will be able to mix and match networking software and hardware as they see fit. In fact, Dell, for example, already supports multiple SDN implementations on its switches and just became a platinum sponsor of Project OpenDaylight.

Michael Vizard
Michael Vizard is a seasoned IT journalist, with nearly 30 years of experience writing and editing about enterprise IT issues. He is a contributor to publications including Programmableweb, IT Business Edge, CIOinsight, Channel Insider and UBM Tech. He formerly was editorial director for Ziff-Davis Enterprise, where he launched the company’s custom content division, and has also served as editor in chief for CRN and InfoWorld. He also has held editorial positions at PC Week, Computerworld and Digital Review.
Previous articleEnterprise Mobility Comes of Age Amid Challenges
Next articleIT Services Sector Continues to Add Jobs