As part of a cloud-first strategy, Oracle is getting ready to launch a channel program geared specifically for its cloud partners. 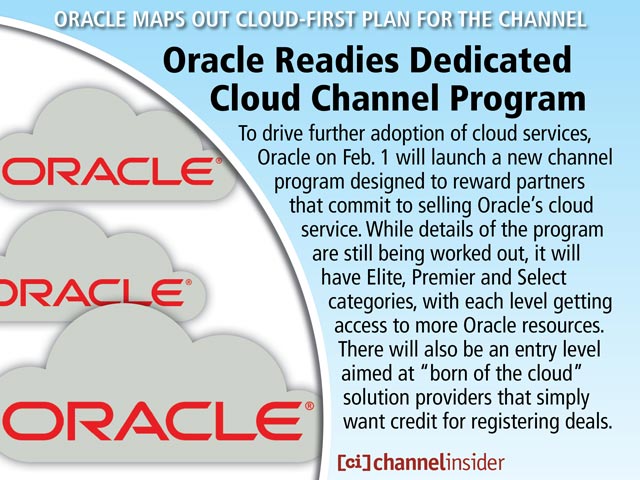 To drive further adoption of cloud services, Oracle on Feb. 1 will launch a new channel program designed to reward partners that commit to selling Oracle’s cloud service. While details of the program are still being worked out, it will have Elite, Premier and Select categories, with each level getting access to more Oracle resources. There will also be an entry level aimed at “born of the cloud” solution providers that simply want credit for registering deals. Size of the Oracle Cloud Channel

Oracle already has more than 1,500 partners selling cloud services, which gives it access to about 5,000 implementation and cloud specialists and some 10,000 cloud sales specialists. All told, there are more than 26,000 partners in the Oracle Partner Network (OPN). In the last quarter, Oracle’s cloud resale program grew more than 122% year-over-year. 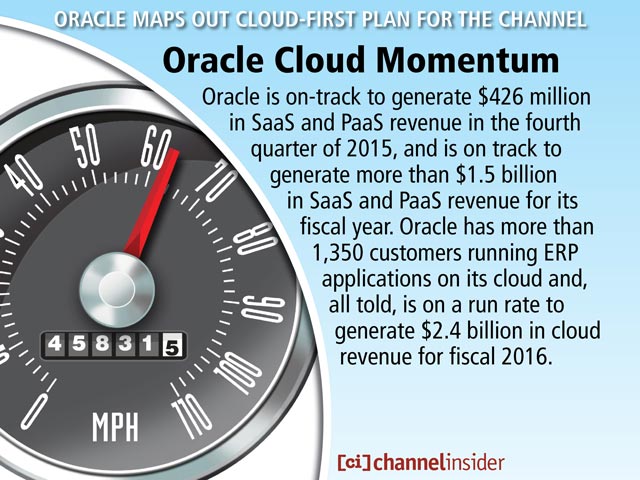 Size of the Oracle Cloud

Oracle is running more than 600 cloud applications across 20 global data centers that process 33 billion transactions per day servicing more than 40 million subscribers. Oracle is making a case that moving management functions into the cloud results in more than enough savings to justify the transition to the cloud. Oracle is expanding the number of incentive rebates for cloud services across the majority of Oracle’s SaaS, PaaS and IaaS offerings. In addition to rebates, the Oracle Cloud resale program provides partners the ability to sell multi-year deals, as well as take advantage of renewals and up-sell opportunities to create both an ongoing annuity as well as front-end margins. Oracle has defined more than 180 specializations and 150 certifications and provided more than 850 guided learning paths to help partners master its cloud portfolio. Oracle is trying to drive more independent software vendor (ISV) partners onto its cloud to create a richer portfolio of applications that channel partners will be able to one day resell alongside Oracle applications. All told, there are more than 10 million developers using Java, and now Oracle is adding support for other programming languages such as Node.js and Python. Getting Aboard the Red Stack

Oracle plans to reserve the highest level of support and rewards for partners that deploy Oracle software on top of Oracle Engineered Systems that combine Oracle servers, databases and middleware. The goal is to have the same Oracle software deployed on premise and in the cloud. While Oracle clearly prefers SPARC processors over x86 processors, the company is partnering with Intel to target IBM Power systems customers with free proof-of-concept database migration services along with Project Apollo engineering efforts through which both companies are sharing research and development.

Michael Vizard
Michael Vizard is a seasoned IT journalist, with nearly 30 years of experience writing and editing about enterprise IT issues. He is a contributor to publications including Programmableweb, IT Business Edge, CIOinsight, Channel Insider and UBM Tech. He formerly was editorial director for Ziff-Davis Enterprise, where he launched the company’s custom content division, and has also served as editor in chief for CRN and InfoWorld. He also has held editorial positions at PC Week, Computerworld and Digital Review.
Previous articleAvnet Cloud Marketplace Makes Its Debut
Next articleMicrosoft, Red Hat Strike Broad Cloud Alliance