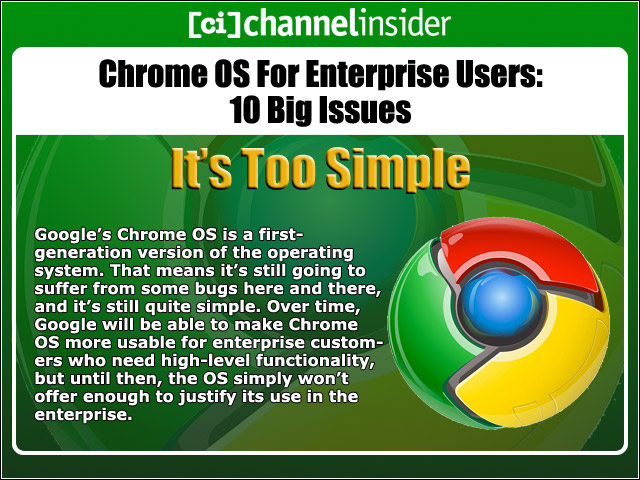 Google’s Chrome OS is a first-generation version of the operating system. That means it’s still going to suffer from some bugs here and there, and it’s still quite simple. Over time, Google will be able to make Chrome OS more usable for enterprise customers who need high-level functionality, but until then, the OS simply won’t offer enough to justify its use in the enterprise. 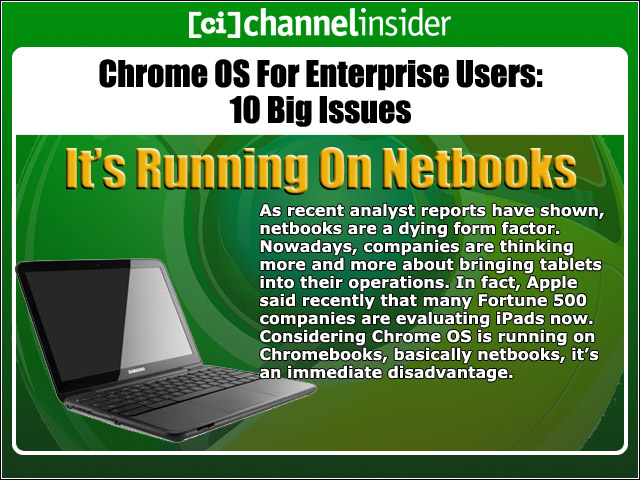 As recent analyst reports have shown, netbooks are a dying form factor. Nowadays, companies are thinking more and more about bringing tablets into their operations. In fact, Apple said recently that many Fortune 500 companies are evaluating iPads now. Considering Chrome OS is running on Chromebooks, basically netbooks, it’s an immediate disadvantage. Currently, enterprise customers are heavily invested in Windows. They need Microsoft’s operating system to perform daily tasks, get work done, and much more. Simply put, in the corporate world, it’s Windows and all else. And Chrome OS just isn’t Windows. That alone makes it a non-starter for IT decision-makers. 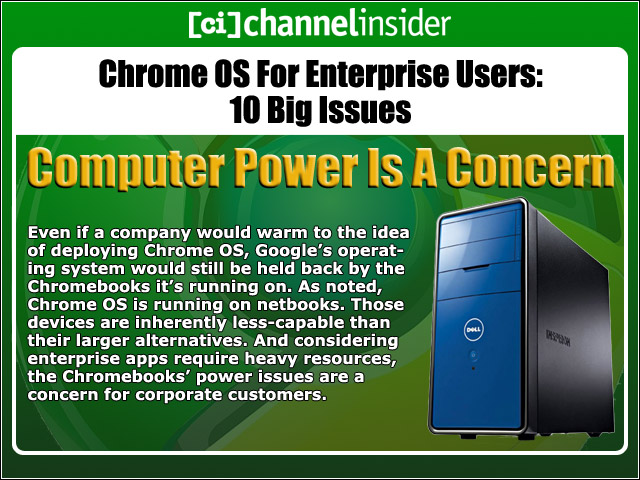 Computer Power Is A Concern

Even if a company would warm to the idea of deploying Chrome OS, Google’s operating system would still be held back by the Chromebooks it’s running on. As noted, Chrome OS is running on netbooks. Those devices are inherently less-capable than their larger alternatives. And considering enterprise apps require heavy resources, the Chromebooks’ power issues are a concern for corporate customers. Mobile applications are all the rage on tablets and smartphones. But they’re extremely important on the desktop. Companies rely upon corporate-focused programs to get their daily work done. Chrome OS won’t come with compatibility with those applications. That alone makes it a major issue for corporate customers. 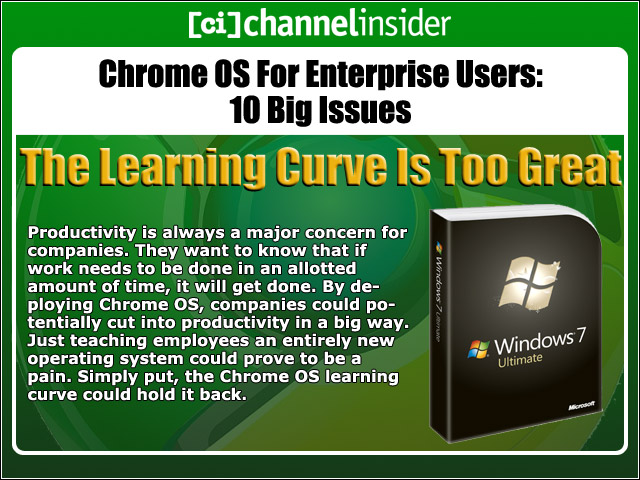 The Learning Curve Is Too Great

Productivity is always a major concern for companies. They want to know that if work needs to be done in an allotted amount of time, it will get done. By deploying Chrome OS, companies could potentially cut into productivity in a big way. Just teaching employees an entirely new operating system could prove to be a pain. Simply put, the Chrome OS learning curve could hold it back. 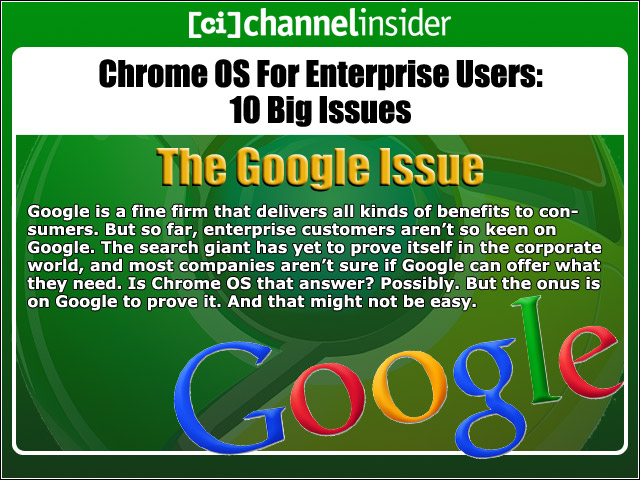 Google is a fine firm that delivers all kinds of benefits to consumers. But so far, enterprise customers aren’t so keen on Google. The search giant has yet to prove itself in the corporate world, and most companies aren’t sure if Google can offer what they need. Is Chrome OS that answer? Possibly. But the onus is on Google to prove it. And that might not be easy. 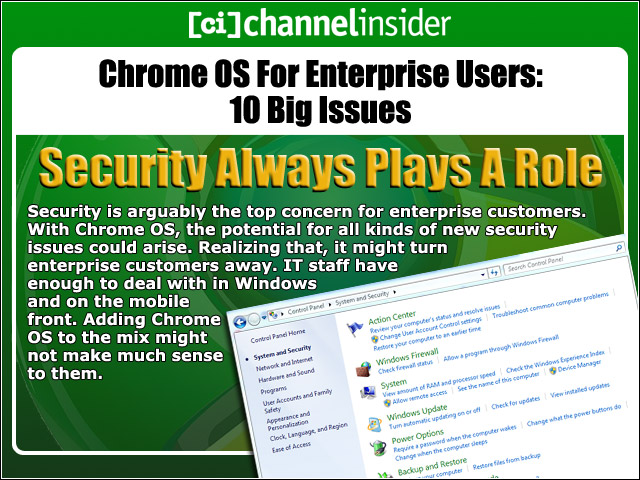 Security is arguably the top concern for enterprise customers. With Chrome OS, the potential for all kinds of new security issues could arise. Realizing that, it might turn enterprise customers away. IT staff have enough to deal with in Windows and on the mobile front. Adding Chrome OS to the mix might not make much sense to them. 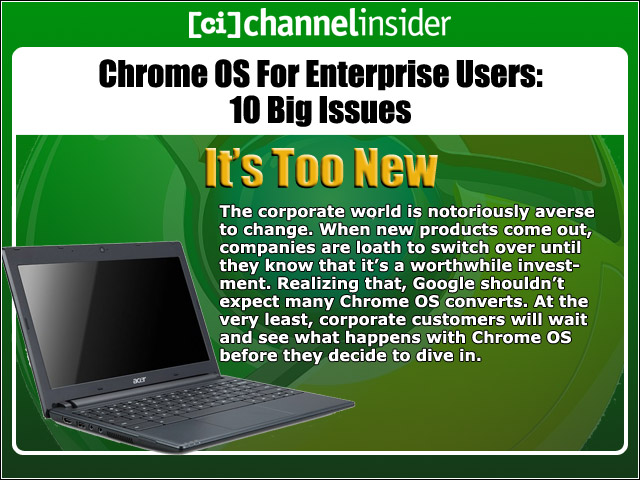 The corporate world is notoriously averse to change. When new products come out, companies are loath to switch over until they know that it’s a worthwhile investment. Realizing that, Google shouldn’t expect many Chrome OS converts. At the very least, corporate customers will wait and see what happens with Chrome OS before they decide to dive in. 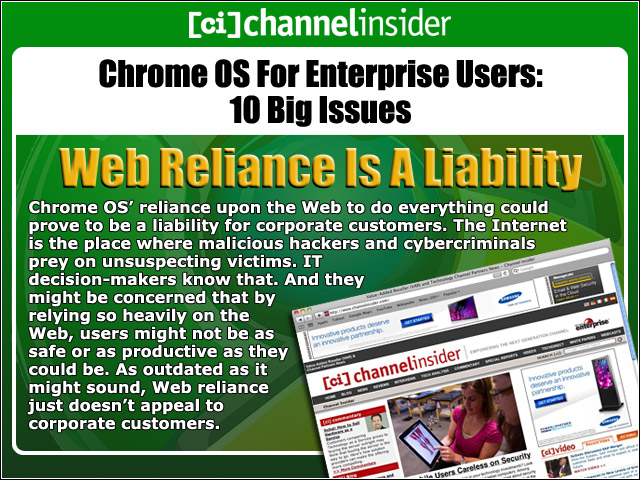 Web Reliance Is A Liability

Chrome OS’ reliance upon the Web to do everything could prove to be a liability for corporate customers. The Internet is the place where malicious hackers and cybercriminals prey on unsuspecting victims. IT decision-makers know that. And they might be concerned that by relying so heavily on the Web, users might not be as safe or as productive as they could be. As outdated as it might sound, Web reliance just doesn’t appeal to corporate customers.