How Containers Are Holding Water Amid Challenges How Containers Are Holding Water Amid Challenges

The container market has garnered much excitement. Here’s a look at how and why containers are used and the challenges and opportunities that have emerged. 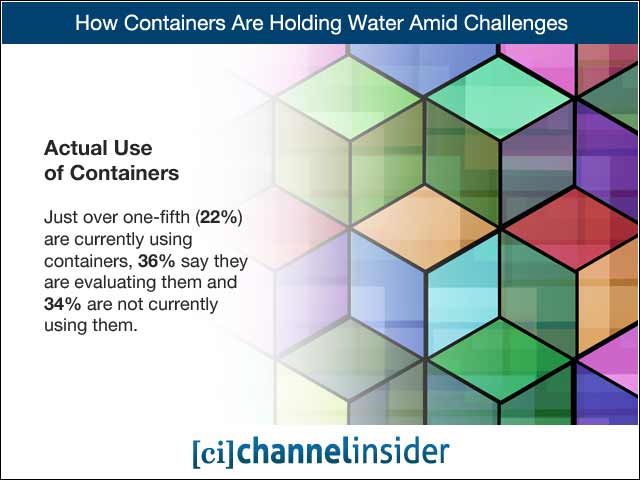 Actual Use of Containers 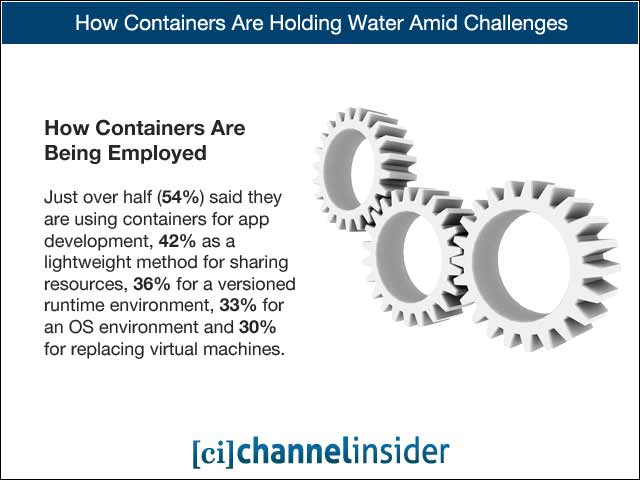 How Containers Are Being Employed

Just over half (54%) said they are using containers for app development, 42% as a lightweight method for sharing resources, 36% for a versioned runtime environment, 33% for an OS environment and 30% for replacing virtual machines. Security and isolation top the list of container benefits, at 42%, followed by easier version control (37%), an ability to have a consistent app development and production environment (36%), and an overall lighter-weight footprint (35%). Too complex to integrate (45%) is cited most often as the biggest concern, followed by not enough skills (35%), and too much time to manage and not enough cost reduction (both tied at 25%). 92% of organizations that have deployed containers say they are a component of a PaaS environment or cloud platform, while 84% said managing containers without a provider would be a challenge. Deploying containers at scale and container complexity were cited as issues by 82% and 80%, respectively. Where the Containers Are Among the 15% using “self-managed orchestration tools,” CoreOS Tectonic, a commercial distribution of Kubernetes and CoreOS, leads with 27%, followed closely by Hashicorp’s Nomad (25%) and Docker Swarm (22%). Trailing the top three are Apache Mesos (19%), Mesosphere DCOS (6%) and Tutum (1%). Michael Vizard
Michael Vizard is a seasoned IT journalist, with nearly 30 years of experience writing and editing about enterprise IT issues. He is a contributor to publications including Programmableweb, IT Business Edge, CIOinsight, Channel Insider and UBM Tech. He formerly was editorial director for Ziff-Davis Enterprise, where he launched the company’s custom content division, and has also served as editor in chief for CRN and InfoWorld. He also has held editorial positions at PC Week, Computerworld and Digital Review.
Previous articleReplacing the ‘M’ in MSP With Other Terms
Next articleAdtran Moves to Woo MSPs to Gain Market Share